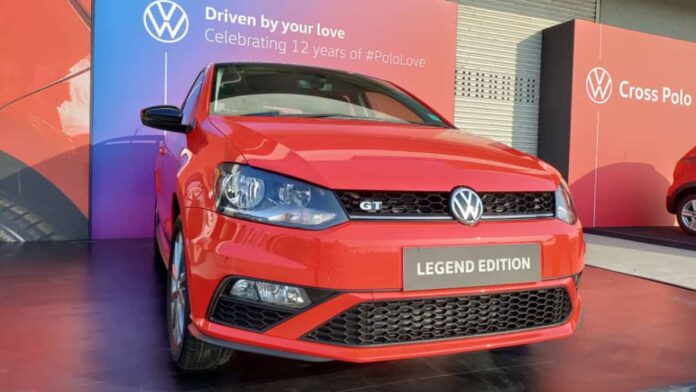 The Volkswagen Polo Legend Edition is based on the Polo GT TSI model already on the market. It uses the same 1.0-liter turbocharged petrol engine that produces 110 horsepower and 175 Nm of peak torque. A 6-speed automatic transmission is available with this engine. The automobile has visual differences that set it apart from the standard Polo. Legend logos can be found on the front fender and boot. It also has black decals, black boot garnishes, and a blacked-out roof, among other things. The Legend Edition will be produced in 700 units and will cost Rs 10.25 lakh ex-showroom.

“The Volkswagen Polo is an iconic carline that has generated varied emotions amongst consumers,” said Ashish Gupta, Brand Director, Volkswagen Passenger Cars India, at the launch of the Polo Legend. Because of its timeless and sporty design, safety, fun-to-drive experience, and solid build quality, the Volkswagen Polo has had the honor of being the first car for a family, an enthusiast’s dream, and the preferred choice for a mother since its market introduction. The Volkswagen Polo has been a popular model for the company, and it merits a big celebration. For this reason, the firm is launching a commemorative limited “Legend edition” for Polo fans who will be proud to acquire one of the final restricted copies of the classic model.”

The History Of Polo

The sixth-generation Polo has arrived in India. It was built at Chakan, near Pune, at Skoda-manufacturing Volkswagen’s site. It was also the company’s first car to be locally made in India. Polo’s manufacture began in 2009, and it went on sale in 2010. The hatchback has been on sale in India since then. Polo received a generation upgrade on the international market, however, it was never sold in India. We kept getting the fifth-generation Polo, which had modest cosmetic tweaks and new features. The Volkswagen Polo is a popular automobile among automotive enthusiasts.

The design is the key reason why Volkswagen was still able to sell Polo in the Indian market. The car’s design is simple, but it does not appear dated now. The hatchback’s classic appearance, combined with the good engine options supplied by the manufacturer over the years, allowed it to carve out a niche in the premium hatchback segment. Volkswagen will also phase out the Vento sedan, in addition to the Polo. It will be replaced by the Virtus, a brand-new sedan that will be released in the following months.

5 Most Affordable Hatchbacks In India