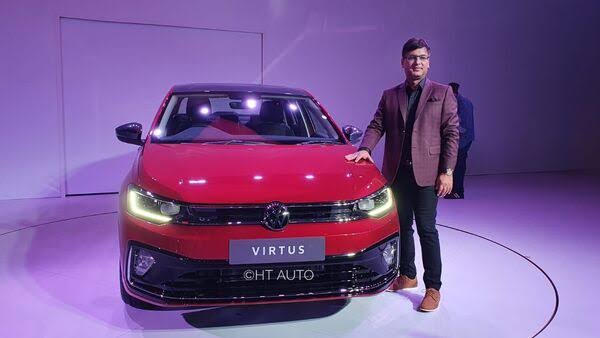 The new Virtus compact sedan, which makes its global debut, has been unveiled by Volkswagen India. The all-new offering is the fourth automobile manufactured on the MQB A0 IN platform under the SAVWIPL banner and is the newest car to be built on the platform. The new Volkswagen Virtus will be available with three engine options and three transmission options, with the more powerful variants sporting the coveted GT designation. Volkswagen has begun taking pre-orders at its sales outlets across India, with a debut date set for later this year.

The 1.0-litre TSI turbo petrol engine produces 113 bhp and 175 Nm of peak torque and is mated to a 6-speed manual transmission and a 6-speed torque converter. The GT Line will be powered by a 1.5-litre TSI EVO engine that produces 148 horsepower and 250 Nm of peak torque. This engine will be available with a 6-speed manual or a 7-speed DSG transmission. The 1.5-litre TSI EVO will also include Active Cylinder Technology (ACT), which disables two cylinders to improve fuel economy and pollution. Closer to the debut, further information on the fuel economy metrics and costs will be available.

The digital instrument dashboard, 10-inch touchscreen infotainment system with Apple CarPlay and Android Auto, My Volkswagen Connect, an electric sunroof, automatic climate control, ventilated front leather seats, cruise control, and wireless charging are all available features in the cabin. There are also 60:40 split back seats, a cooled glovebox, and other features in the cabin. The Virtus also comes standard with LED headlamps, alloy wheels, and a touchscreen infotainment system, according to VW.

The Volkswagen Virtus takes the place of the Vento in the company’s lineup and is significantly larger. It had a length of 4561 mm and a width of 1752 mm, with a wheelbase of 2651 mm. The boot has a capacity of 521 litres, which is rather outstanding. It’s also the class’s longest and widest vehicle. The vehicle also appears to be more angular and edgy, approaching the dimensions of the previous generation VW Jetta that was on the market in the country. The variant features a broad grille with a chrome outline that blends into the Virtus’ standard LED headlamps.

A large central air intake with vertically stacked fog lamps and chrome inserts is featured on the front bumper. The rear has wraparound LED taillights with a distinctive pattern, as well as chrome bumper inserts. The Virtus comes standard with 16-inch alloy wheels. The normal one has chrome-plated alloys, while the Performance line has black-plated alloys for a sportier look. The cabin, like the rest of the house, has a modern and contemporary feel to it. When the Virtus goes on sale, it will be available in six different colours.