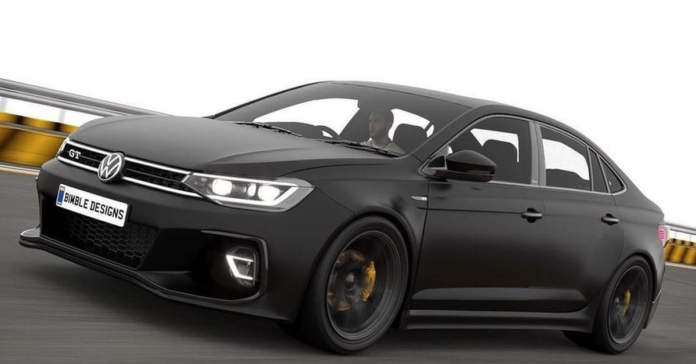 The Virtus has yet to be priced by Volkswagen, but it has been attracting a lot of attention at dealerships. The mid-size sedan’s design is currently one of the greatest in the market. It appears to be well-balanced, with a large boot, high ground clearance, and decent road presence. The artist has imagined the mid-size car with a wide body kit and matte black paint job in this rendering of the Virtus.

Bimble Designs created the rendering. The Virtus, as can be seen, is finished in a matte black paint hue, which is rather uncommon. The beltlines on the windows have been de-chromed.

From the flanks, we can observe that the wheel arches are somewhat flared, giving the sedan a more aggressive aspect. The matte black coating on the alloy wheels adds to the unique appearance. Furthermore, the brake callipers are now yellow.

The tail lamp design is similar in the back, but the parts have been modified. A boot lid spoiler is included, as well as a more aggressive bumper with a diffuser. It now has a new exhaust system as well. Furthermore, the sedan’s ride height has been drastically reduced.

It’s worth noting that Volkswagen hasn’t confirmed whether a matte black variant or a Virtus with a wide body package would be available. Having said that, the Virtus’ rendering is quite nice and has a lot of road presence.

The Virtus has begun to arrive at dealerships, allowing you to test drive the new mid-size car. Pre-bookings for Rs. 11,000 have also begun. The Volkswagen Virtus pricing will be revealed on June 9th.

A blacked-out top, alloy wheels, and exterior rearview mirrors would all be included in the Performance Line. A boot lid spoiler and brake callipers would also be included. Additionally, the interior would undergo cosmetic alterations. The seats, steering wheel, and gear lever would all have crimson stitching. Colored accents would also be present on the dashboard, centre console, and door pads.

Most popular cars in Singapore