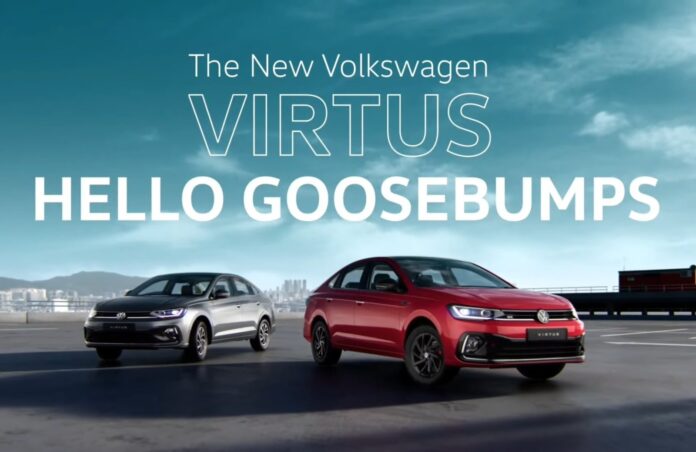 The sedan segment seems to be dying nowadays. Many companies are focusing on launching SUVs or compact SUVs to cater for public taste. Only a few companies are getting good sales with their sedans. That’s why the launch of Skoda Slavia was a relief to sedan loving people. Recently, Volkswagen unveiled their new Sedan, the ‘Virtus’. It is the recent addition in the Sedan market that is currently dominated by Honda City. The Virtus seems like it will shake the SUV sales in the Indian Market. It is surely packing some great specs to match the competition. Let’s compare the Virtus with the competition to see how it fares:-

Volkswagen says that the Virtus is the longest sedan in the segment. It is even longer than the Vento that it replaces. It gets a length of 4561 mm and a width of 1752 mm, with a wheelbase of 2651 mm. With a big boot space of 521 litres, it makes sure the competition stands nowhere near it. Even though the Skoda Slavia is based on the same platform, it is smaller than the Virtus with its length being 4541 mm. For comparison, the Honda City is 4549 mm long, Hyundai Verna is 4440 mm long and the Maruti Suzuki Ciaz is 4490 mm long. The only car which comes close with the boot space of Virtus is the Ciaz with a boot space of 510 litres.

This is one aspect in which Skoda Slavia gets the advantage of the shared platform. The Volkswagen Virtus shares its engine options with Skoda Slavia. Both get 1-litre and 1.5-litre TSI engines that make 114 HP and 150 HP respectively. The active cylinder technology disables two cylinders to improve fuel economy and reduce pollution. On the Other hand, Honda City makes 120 HP, Hyundai Verna Makes 113 HP and Maruti Suzuki Ciaz makes 103 HP. The advantage of Honda City and Hyundai Verna here is that both are offered in Diesel variants also.

We can clearly see who is the winner in looks. The Volkswagen Virtus has aggressive as well as striking looks. The Chrome grille and alloy wheels make it stand out in the crowd. Its road presence is unmatched. Its rivals don’t look that bad but none can match the Virtus in terms of looks. When it comes to tech, all have different technological aspects. The Volkswagen Virtus gets 40+ safety features like ESC, Multi-collision brakes, hill hold control. The Honda City gets a Lanewatch camera (Like Honda Civic) and Amazon Alexa connectivity. What all cars have in common is the connected car tech features including support for Android Auto and Apple CarPlay.

The price of Volkswagen Virtus has not been revealed yet. But it is expected to be priced aggressively against its rivals. Meanwhile, the pricing of Honda City goes from 12.83 Lakhs to 14.98 Lakhs. Maruti Suzuki Ciaz ranges from Rs. 8.87 Lakhs to Rs. 11.86 Lakhs. The Hyundai Verna costs 9.32 to 15.36 Lakhs. Skoda’s newly launched Slavia is priced from 10.69 Lakh to 15.39 Lakh. (All prices are in INR)

The Volkswagen Virtus surely seems like it will dominate sales charts with aggressive looks and striking performance to match it. We hope Volkswagen prices it correctly as the competition is strong. Giving the best value for money is the important aspect here. The Virtus is a well-rounded product that has the power of reviving the dying sedan segment. All that matters now is how Volkswagen prices it.