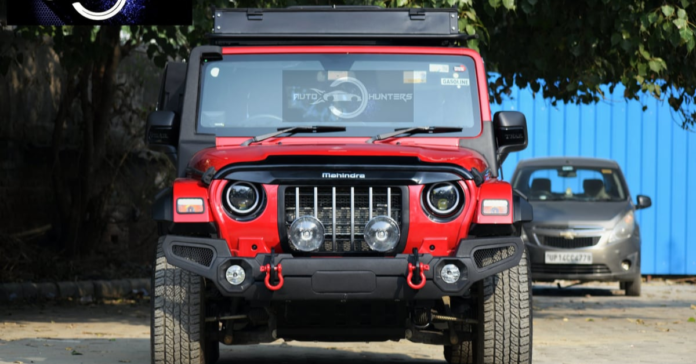 Since its premiere in 2020, the next-generation Mahindra Thar has topped the sales charts, and the business is now restructuring its production to keep up with demand. Despite the fact that it is a new SUV, several accessories and body packages are already available on the market, and many purchasers are having their Thars modified shortly after delivery.

Bimbra 44, situated in Gurugram (Haryana), has customised the new Thar for one of its clients, and it has been designed for hard-core adventure enthusiasts.

The Thar Adventure Edition by Bimbra 44 now comes with an all-new off-road front bumper, two hooks, and integrated fog lights, among other features. In addition, two auxiliary lighting have been put on the front bumper by the modifications.

The addition of a snorkel to the new modified Thar gives it a unique appearance, while the headlamps are aftermarket LED ones. A huge roof rack with many integrated carriers and additional space for various objects is installed on the roof of this ordinary Thar. The SUV has a ladder on either side and panniers for jerry cans in the back. The back bumper has also been altered, with a tow hitch in the centre.

The vehicle is based on a petrol-automatic model with a hardtop roof, and the engine hasn’t been changed. This particular model also comes with Mahindra’s ‘Dark Lord’ accessory package, which is an approved accessory kit.

Mechanically, there are two engine possibilities for the new Thar vehicle. The first is a 2.0-litre’mStallion’ petrol engine with 150 PS of peak output and 320 Nm of maximum torque (300 on MT). The second is a 2.0-litre’mHawk’ diesel engine that produces 130 PS and 300 Nm of torque. There are two transmission options for the SUV: a 6-speed manual and a 6-speed automatic.