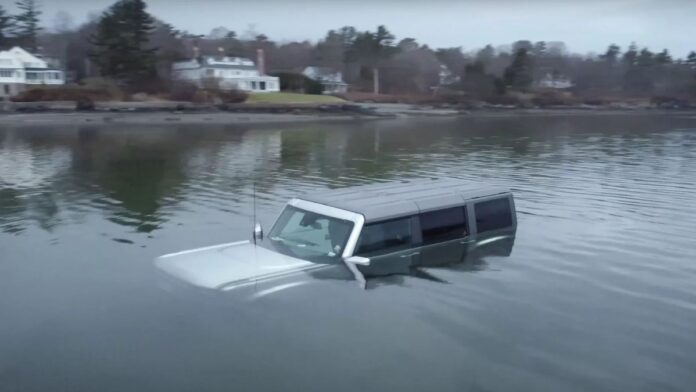 If you order a new Bronco with the correct extras, you can give Ford’s classic SUV superhero-level off-road abilities. However, if you choose the wrong area to play, like this Bronco driver in Maine did, you’ll be reminded quickly and painfully that mother nature is always more strong.

These photos were taken at Bar Harbor, Maine, where a new Ford Bronco had been trapped in the sand for the previous two days, with much of that time spent underwater. The four-door Bronco, which seems to have New Jersey plates, was stranded late Saturday afternoon by Bar Harbor’s quickly rising tide, and attempts to rescue it on Saturday night and Sunday both failed.

According to unconfirmed local sources, the out-of-state driver disregarded warning signs about driving on the bar too close to high tide and was doing doughnuts on the beach before being stranded.

Attempts to get the Bronco out before the tide came in on Saturday night failed, forcing it to spend the night totally buried until rescue personnel arrived at low tide the next morning. However, the Bronco’s gearbox and/or brakes are locked, and attempts to remove the SUV resulted in a snapped 3-in tow line with the Ford becoming firmly trapped as the tide came in again.

On Sunday evening, the team returned and were able to move the Bronco about 100 feet (30 metres), but were forced to abandon the effort as the tide approached the coast. The latest plan, according to WDEA, is for a diver to return with airbags on Monday morning at low tide (06.29), so the automobile may be floated to the coast at high tide (12.39).

The extent of the damage to the Bronco is unknown, but the owner is unlikely to drive it back to New Jersey. Apart from bearing some rescue costs and wrangling with his insurer to determine whether the damage is even covered, several Bronco6g forum commentators have noticed to photos of what look to be oil or gasoline leaks surrounding the Bronco and predicted that he may face environmental remediation fines.

This isn’t the first time the desire to do a bunch of donuts in places where you shouldn’t had gotten a Bronco driver in hot water. We reported in February that a motorist was arrested after tearing up the grass at Petco Park, the home of the San Diego Padres.