Why Did Toyota’s GR Corolla Launch Cars Have An EV Button And Analog Stock Gauges? 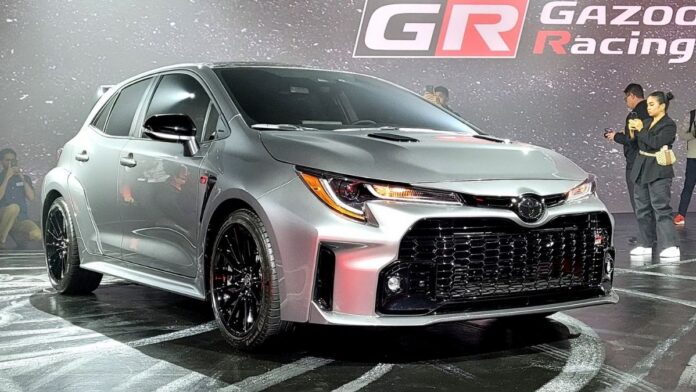 We’ve spent the last 12 hours, just like you, going through all of the important stats and features of the 2023 Toyota GR Corolla. One element was noticeably omitted from one of the exhibition automobiles, while another was prominent and clearly shouldn’t have been.

To coincide with the worldwide presentation, which we witnessed in person, Toyota published a set of glossy, studio photographs of its newest GR machine. Details like the triple exhaust and 12.3-inch digital instrument cluster are highlighted in the meticulously crafted group of photos.

However, the launch cars that Toyota let us get up and personal with during the unveiling differed in a few key respects. The most noticeable inconsistency was the grey vehicle, which, as a Circuit Edition model, should include hood vents, a carbon top, a large rear wing, aluminum panels, and a pair of Torsen differentials not seen on the standard model.

The TFT dashboard panel, which is meant to be standard on all GR Corollas, was missing from this Circuit Edition car’s spec. Instead, it had a typical set of analog clocks, including a 160 mph (258 km/h) speedo to the left of it, a tach redlined at 6,500 rpm to the right, and a tiny digital screen to the right.

It also lacked the GR’s standard-fit 8-inch infotainment touchscreen, instead opting for an outdated display with additional hard keys positioned around the sides found in Corollas with less than half the power.

Meanwhile, the red vehicle was a Core model, which means it has the same flared fenders, 300 horsepower (304 PS) turbocharged triple, and six-speed manual gearbox as the other cars, but without the hood vents, fancy roof, or rear spoiler.

This automobile had the right digital instrument package and an 8-inch touchscreen, but it also had its own peculiarity: a “EV” button. The GR Corolla isn’t an electric vehicle or a plug-in hybrid, and Toyota has no plans to make it one anytime soon, but an EV mode would help set it apart from its Volkswagen Golf R rival. These automobiles were most likely manufactured so far ahead of the final production models that whatever components were available were used.

When we inquired why the cars’ specs didn’t match the ones they were communicating during the introduction, a Toyota official said we shouldn’t read too much into it. Still, it seems odd to present the vehicles knowing that the images would be splashed all over the internet, especially the grey car, which undersells the reality of the GR Corolla by missing certain crucial characteristics. But it doesn’t stop us from looking forward to the actual deal.