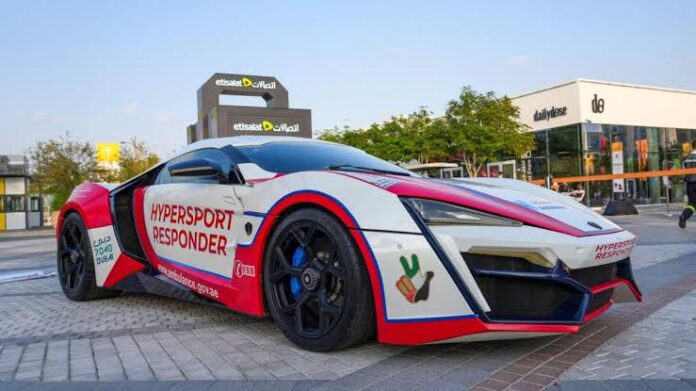 At the Dubai Expo, the DCAS, or Dubai Corporation of Ambulance Services, showcased the world’s fastest and most costly ambulance. This ambulance, dubbed the “HyperSport Responder,” is a Lykan HyperSport. The Lykan HyperSport, created by W Motors in Dubai, is an ultra-rare hypercar made famous by the Fast and Furious franchise. Only seven Lykan HyperSport units exist in the world, and each one costs over 26 crores.

The Hyper Car can accelerate from a standstill to 100 kilometres per hour in only 2.8 seconds and has a peak speed of 400 kilometres per hour, according to the manufacturer. This vehicle also includes a set of 440 diamonds that run along the front LED lights, as well as a gold-plated top and gold stitched leather in the inside. This vehicle also has the world’s first 3D hologram holographic mid-air display, which can be controlled using motion gestures. In terms of performance, the automobile is totally composed of carbon fibre to save overall weight and is powered by a twin turbocharged 3756 cc inline six engine with a power output of 780 Bhp and 960 Nm of torque situated in the back.

The car’s body is made of carbon fibre, and it has the world’s first 3D hologram holographic mid-air display with interactive motion control. Dubai has once again proven that it is one of the world’s most progressive cities in terms of technology and design. The HyperSport Responder’s goal is to shorten emergency response time by ensuring speedy intervention. Khalifa bin Darrai, CEO of DCAS, said in a statement, “The speed and capabilities of the car may drastically shorten reaction time during crises and assure early intervention.”