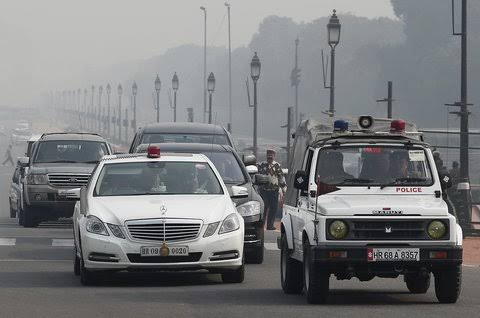 As India is the largest and most complex democracy in the whole world; the job of Indian politicians is no joke. While And that means commuting a lot. While commuting to different locations they need rugged vehicle & spacious at the same time. So today we will be looking at 5 expensive cars of Indian politicians.

Rajnath Singh is an Indian politician serving as the Defence Minister of India.He is currently the Deputy Leader of the House Lok Sabha. He is the former President of Bharatiya Janata Party. Currently defence minister of India’s has his regular car Tata Safari (old model). Although this car were specially designed and developed by SPG (special protection force) considering the saftey. Although no one has exact price figure of this car but the standard Safari has a price tag of Rs. 11 Lakh in India.

Mamata Banerjee is an Indian politician who is serving as the ninth and current Chief Minister of the Indian state of West Bengal since 2011, the first woman to hold the office. This women leader has a very insane political influence in West Bengal and lots of people have faith on Mamata Didi. While moving on roads the lady uses Mahindra Scorpio along with her convey. The standard model has a approximate price tag of Rs. 17 Lakh.

Arvind Kejriwal is an Indian politician and a former bureaucrat who is the current and 7th Chief Minister of Delhi since February 2015. He was also the Chief Minister of Delhi from December 2013 to February 2014, stepping down after 49 days of assuming power. Being an leader of the capital city Kejriwal has lot to do in service time so he prefers Toyota Fortuner while moving to diffrent location in Delhi. Toyota Fortuner comes at the price tag of Rs. 40 Lakh in India. Toyota Fortuner don’t need an introduction it’s already the king of the segment.

Yogi Adityanath is an Indian Hindu monk and politician serving as the 22nd and current Chief Minister of Uttar Pradesh, in office since 19 March 2017. One of the coolest CM of the Uttar Pradesh state has 2 Land Cruiser Prado but he loves ride in a Mercedes ML 350. The ML 350 comes around at the price tag of Rs. 65 Lakh in India.

Amit Anil Chandra Shah is an Indian politician currently serving as the Minister of Home Affairs and the first Minister of Co-operation of India. He served as the President of the Bharatiya Janata Party from 2014 to 2020. This man has no need of introduction, this game changer politician has Toyota Land Cruiser in his car fleet. Toyota Land Cruiser Prado has a price tag of around Rs. 1 Crore in India.