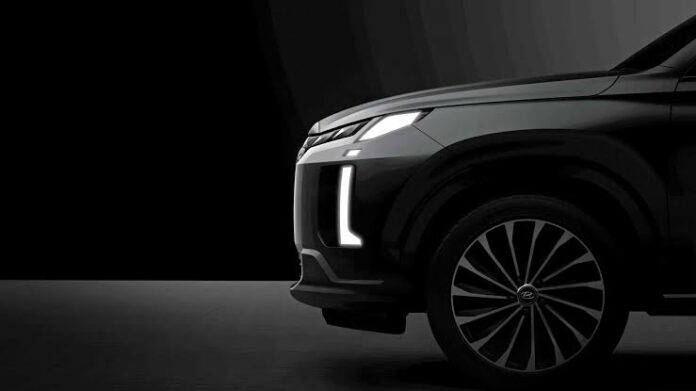 Hyundai has issued a series of teasers for the redesigned Palisade ahead of its April 13 global premiere. Some of the design improvements to Hyundai’s massive three-row SUV are revealed in the teasers, including an upright snout with an even wider grille and new light clusters. In comparison to the current model, which was debuted in late 2018, the redesigned SUV seems to have a more upright snout, as well as design elements that are consistent with the company’s contemporary design language.

So far, Hyundai has issued two teasers, both of which reveal a portion of the SUV’s nose and front fender. The nose appears to be more upright than the previous model. With significant creases flowing backward from the grille, the bonnet also looks to be new. The grille itself is wider and more rectangular, and it appears to be based on Hyundai’s new parametric grille, which features individual block detailing. Two wing-like extensions flow from the grille to the DRLs along the top.

The DRLs themselves have a similar design to those on the previous SUV, although they appear to be positioned farther outward and divided into three portions. The primary headlight components are most likely housed in the bumper housing, which is a design featured on most current Hyundai SUVs. In comparison to the present model, the Palisade is expected to have a more upright front end. The picture of the fender shows massive multi-spoke alloy wheels filling up the prominent wheel arches. There are no further modifications evident in the teasers, although Hyundai is expected to refresh the design at the back and within the interior. The SUV’s basic design and sides are anticipated to stay mostly unaltered.

Trending Now:  Audi A6 Avant E-Tron Concept Teased In A Veil Of Darkness

Hyundai considered the Palisade for India a few years ago, but it’s unclear whether the SUV would ever arrive in the country.