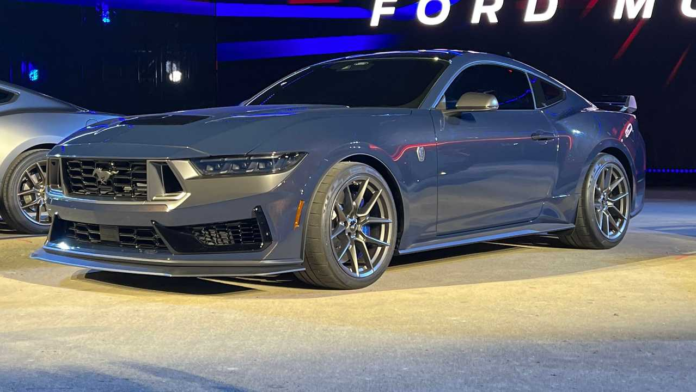 Ford has an early gift for fans of performance this holiday season. The seventh-generation Mustang’s official horsepower figures are in, and as was predicted, the new Dark Horse model tops the list with an even 500 horsepower and 418 pound-feet of torque. The GT, with a 480 hp official rating, isn’t far behind. Power increases to 486 horsepower when the optional exhaust upgrade is added. The 315 hp for EcoBoost models is slightly increased.

The fourth-generation Coyote V8 in the Dark Horse is the most potent naturally aspirated 5.0-liter production engine Ford has ever offered, even though there have been more potent Mustang models over the years. The engine’s internals have been upgraded, including the connecting rods, which are forged, the crankshaft, which is specially balanced, and the camshafts. The modifications enable the Mustang Dark Horse to enjoy its 7,500-rpm redline in addition to a slight power boost.

The GT also houses this fourth-generation Coyote mill. Due to a new dual throttle body design, it has a standard 480 horsepower rating that is comparable to recent Mustang Bullitt and Mach 1 iterations. The 486-hp peak, however, requires that you choose the optional active performance exhaust system. With the exhaust upgrade, maximum torque is 418 lb-ft; without it, it is 415 lb-ft. Both automatic and manual transmission vehicles have the same power ratings.

Ford claims that the turbocharged 2.3-liter EcoBoost four-cylinder engine in the base model Mustang is completely new. The mill has a new bore-to-stroke ratio, a new direct injection system, and numerous other changes for a little bit more power while also aiming for better fuel economy, even though the displacement is the same. It is officially the most potent base-model Mustang Ford has ever offered, producing 315 horsepower and 350 lb-ft of torque.

“Mustang has always pushed the envelope,” said Ford Mustang Chief Engineer Ed Krenz. “From Mustang GT to Dark Horse, this is our best 5.0-liter V8 yet. It’s naturally aspirated awesomeness. And Mustang EcoBoost fans are also getting a boost in power to make every Mustang more fun and visceral to drive.”

Expect the seventh-generation 2024 Mustang to reach dealerships in the summer of 2023.

GM to Launch CarBravo, Its Own Used Car Sales Website