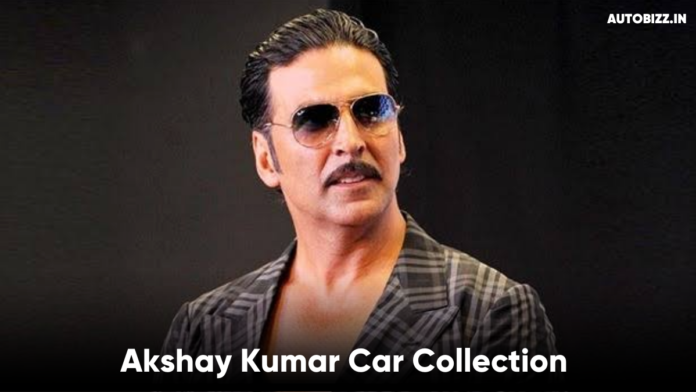 From Hyundai to Range Rover: Akshay Kumar and his Luxurious Cars !

Akshay Kumar AKA Mr. Khiladi of Bollywood is known for his versatility & hard work. Rajiv Hari Om Bhatia is Akshay Kumar’s real name. Akshay Kumar is also known for his fitness & habit of making 5 to 6 films in an year which obviously are blockbusters on a box-office.

Akshay Kumar’s most of cars have digits double 9 on their number plates as he believes in numerology.

Akki owns Mercedes-Benz GLS, which is considered as one of the sport car of Mercedes-Benz. GLS is one of the most luxurious car. It accelerates 0-100 kmph in 6.3 Seconds. Top speed of the car is 238 kmph. It costs around ₹1.04 Cr.

Porsche Cayenne a stylish car is also a part of Akshay Kumar’s garage, and it is price above of a crore, has a 3.6 liter engine that supplies a power output of 300 BHP and 400 Nm. It’s top speed is 260 kmph which is extremely powerful and strong. It priced between ₹ 1.20 Cr. to ₹ 1.90 Cr.

Akki owns Mercedes-Benz V-Class, which is considered as one of the lavish car of Mercedes-Benz. V-Class is one of the most luxurious car. It has seating capacity of 7. The Mercedes-Benz V-Class comes as 2.1 liter diesel engine producing 380 BHP along with a 7-speed automatic transmission. It accelerates 0-100 kmph in 10.9 Seconds. Top speed of the car is 195 kmph. It costs around ₹1.46 Cr. (full loaded model).

Another one SUV from Akshay Kumar’s car the collection is Land Rover Range Rover Vogue is one of the dashing looking car from Land Rover. Black in colour. It has seating capacity of 5. The Range Rover Vogue comes as 3.0 liter petrol engine, producing 394bhp@5500rpm along with 8 speed automatic transmission. It accelerates 0-100 kmph in 7.4 Seconds. Top speed of the car is 209 kmph. It costs around 2.11 crores.

We have seen him roaming around the city many times in this SUV. This car is also a competitor of Porsche Cayenne.

Akshay Kumar always seems to be grounded man, also many times interact with audience and media reporters very friendly and respectfully. he believe that he is just like any other common man. So he also owned Honda CR-V. However, Honda has now discontinued the CR-V. we will see new version of Honda CR-V later this year or next year. This version probably will be electric version of this popular car.

Jeep Compass is one of the most sporty car from American manufacturer ‘Jeep’. It has seating capacity of 5. The Compass comes as in 1.4 lit. and 2.0 lit. engines with petrol and diesel fuel and with all transmission options like manual and automatic. Making 167.67 BHP@3750rpm. It accelerates 0-100 kmph in 10.89 Seconds Top speed of the car is 160 kmph. Price ranges from Rs.17 lakh to 30 lakh, depending upon which model combination of engine, transmission and fuel type we choose.

Mercedes GL350 CDi is no longer owned by the Akshay sold this car.

Ayushmann Khurrana in Mercedes Maybach GLS 600 and Karishma Kapoor in...