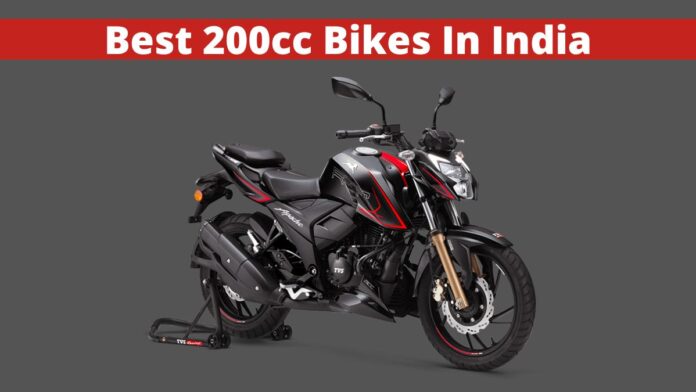 We all know that the engine capacity of a bike is an important consideration when purchasing a new one. However, with so many under 200cc bike options available in India, selecting the best bike can be difficult. As a result, we have made every effort to bring you the list of the best 200cc bikes of 2022, complete with all relevant information such as price, images, mileage, specifications, colors, reviews, and much more, so that you can choose the best 200cc bike of 2022

Bajaj’s first fully-faired motorcycle is the Pulsar RS200. The Bajaj Pulsar RS200 shares the same platform as its sibling, the Pulsar NS200, but with minor differences. The bike has a full-body fairing, clip-on handlebars, a stubby side-mounted exhaust, and dual projector headlights. The motorcycle is powered by a liquid-cooled, 199cc, fuel-injected single-cylinder engine producing 24.5bhp and 18.6Nm of peak torque. A 6-speed gearbox sends power to the rear wheels. The Pulsar RS 200 has a fuel economy of 35 km/l. The acceleration from 0 to 60 km/h takes 3.9 seconds, and the top speed is 141 km/h.

The Hero Xpulse 200 is the brand’s off-road-focused motorcycle. The off-road motorcycle’s design and features are completed by round-shaped LED headlamps, raised front fender, long-travel suspension, dual-purpose knobby tires, upright handlebars, spoked wheels, engine sump guard, and an upswept exhaust. A fully digital dashboard with Bluetooth connectivity, turn-by-turn navigation, and USB charging are among the other features. The Hero Xpulse 200 is powered by a 199.6cc air-cooled, single-cylinder, fuel-injected engine that generates 18.1bhp and 17.1Nm of torque. The engine is mated to a five-speed transmission. The motorcycle also has single-channel ABS.

TVS’ performance brand has been the Apache for over a decade, and the RTR 200 4V is a naked street fighter. The Apache RTR 200 is distinguished by its distinct styling, which distinguishes it from its siblings. The TVS Apache RTR 200 4V is an eye-catching motorcycle, especially with the variety of colors available. The TVS Apache RTR 200 4V is powered by a 197.7cc air and oil-cooled single-cylinder engine mated to a 5-speed transmission. The engine has a maximum power output of 20.7bhp and a maximum torque output of 18Nm. The performance is also excellent, with a 0-60km/h time of around 3.6 seconds and a top speed of 127km/h.

The Bajaj Pulsar NS200 is the motorcycle that completely transformed Bajaj’s market perception. It propelled Bajaj to new heights in terms of both performance and quality. A liquid-cooled motorcycle from India with blistering performance was previously unheard of. The Pulsar NS200 is a street-oriented motorcycle that competes with the KTM Duke 200. The motorcycle is powered by a 199cc liquid-cooled single-cylinder engine that produces 23bhp and 18Nm of peak torque. A 6-speed gearbox sends power to the rear wheels. The engine also includes Bajaj’s triple-spark technology, making it slightly more fuel efficient than the Duke 200 despite sharing the same engine. The motorcycle accelerates from 0 to 60 km/h in 3.8 seconds.

The KTM 200 Duke motorcycle redefined India’s low-capacity performance motorcycle segment. It has remained a best-seller since its introduction, owing to its quick acceleration and performance characteristics. It shattered previous performance benchmarks in the 200cc segment when it was released. The KTM Duke 200 is powered by a 199cc liquid-cooled single-cylinder engine that produces 24.6bhp and 19.2Nm of peak torque. Transmission is handled by a 6-speed gearbox. It accelerates from 0 to 60 km/h in 3.2 seconds and can reach a top speed of 138 km/h. The baby Duke’s fuel efficiency isn’t too bad, with a mileage of around 35km/l.