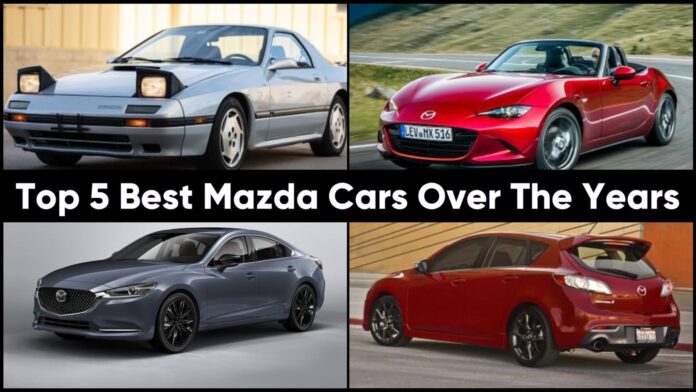 From the ’70s until today, some of the coolest Japanese sports cars ever produced bear the Mazda badge…but so do a few lemons.

Since its inception, Mazda has been one of the leading Japanese sports car manufacturers. Mazda has given the world masterpieces like the Miata and the MazdaSpeed series since the 1970s. Mazda sold over 1,000 Miata MX-5s each month on average in 2021.

Best Mazda Cars Over The Years

Mazdas, particularly the Miata, are among the most popular sports cars on the market because they are not only durable, but they also offer incredible torque and 0-60 speeds, with some models reaching the mark in under five seconds! However, no automobile can be flawless, and Mazda, like every other manufacturer, has delivered the world its fair number of lemons. Here are some of the finest Mazda sports vehicles that have ever been sold.

The Mazda 6 and Miata MX-5 from this year received almost 5-star evaluations from consumers, indicating that 2021 was a successful year for Mazdas. With pricing starting at $25,000, the MazdaSpeed 6 is one of the most inexpensive luxury sedans on the market.

This sedan’s 2.5-liter turbocharged engine, in addition to its affordability and usability, provides fast and efficient acceleration, producing 227 horsepower and over 300 lb-ft torque. The combined fuel efficiency of this 2021 model is similarly 29 miles per gallon. Customers may pick from six various configurations for this automobile, including Sport, Touring, Grand Touring, Grand Touring Reserve, Carbon Edition, and Signature.

You May Like:  Top 10 Best Pickup Trucks in the World

The 2008 Speed 3 gets credit for its strong torque, especially for a hatchback consumer vehicle, just like the 2021 Speed6. The car’s 2.3-liter four-cylinder engine produced 263 horsepower, 280 lb-ft torque, and 20 mpg combined fuel economy. With these specifications, the MazdaSpeed 3 is one of the fastest cars available.

While not a horrible car, the regular Mazda 3 of the same year only had 156 horsepower and 150 lb-ft of torque. The car’s bigger front brake rotors and 18-inch performance wheels, which assist the car corner better than most hatchback trims launched that year, are further design elements that contribute to its effectiveness.

It’s difficult to find a fault with any Miata; the car has a stellar track record for acceleration and drivability. All Miatas built since 2017 come equipped with safety systems including forward-collision alerts, a rear-end camera, and traffic sign recognition encoded into the car. The 2021 Miata MX-5 merits special attention for how its lightweight enhances its handling.

While some sports cars, such as the Dodge Challenger, have more powerful engines (the Challenger has four optional engines, including a 3.6-liter V6 and three different V8 options), the Miata only has a 2.0-liter DOHC four-cylinder that produces around 181 horsepower, which isn’t bad but falls short of some other sports cars that can pull 200. The lightweight and nimble steering reaction of the Miata, on the other hand, compensates for the disparity in acceleration between the two engines. The car’s 0-60 time is still 5.7 seconds.

You May Like:  Watch This Crazy Tesla Model 3 Road Rage Attack And Chase

The RX-7 was initially debuted in 1980, and the engineering and technology improved with each iteration, culminating in one of the most notable engines and performance automobiles ever produced in the 1991 model. The first version had a four-speed automatic gearbox or a five-speed manual transmission, the second had built-in cool air intakes, and the third generation, which was replaced by the RX-8 in 1989, had all of these choices as well as a twin-turbo, twin-rotor engine. Another argument in its favour is that it was one of the last Mazdas to be equipped with those amazing automatic headlights that swung open or closed while in use.

The RX-7 produced just 160 horsepower at 7,000 rpm, which was low by today’s standards, but decent for sports cars created in the 1980s. It also had a combined fuel efficiency of 18 miles per gallon, which was low by today’s standards but respectable for sports cars designed in the 1980s. Because of its simple handling and agility, the RX-7, like other of Mazda’s sports vehicles, has an enormously high customer satisfaction percentage. If you Google the letters RX-7, you’re likely to come up with largely 4 or 5-star ratings. In addition, RX-7s from 1991 are a bit of a rarity, as versions built after 1995 were not offered in the United States.

Mazda officially ended production of the RX-7 after 2002, and trims made between 1995 -2002 were only available on the Euro and Japanese markets. However, it is a noteworthy car that must be included on this list. As one of the last RX-7 models to be produced before being replaced by the RX-8, the Spirit R is one of the best trims money could buy. The 2002 had horsepower and torque that made it the envy of competitors, with 276 hp at 5,000 rpm and 232 lb-ft torque.

One of the most common critical reviews of the RX-7 Spirit and most Mazda sports cars, in general, is praise for their drivability. Mazda’s are notorious for their incredibly easy handling and responsive steering, however only one Mazda with left-hand steering was ever produced in the United States, and it was the property of the Vice President of Mazda North America Robert Davis.