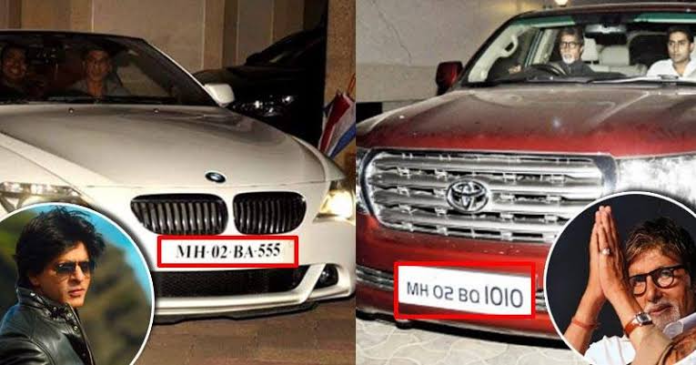 Many celebrities, business persons along the globe has bizarre superstitions, Numerology is one of the kind of matter of belief for individual Bollywood celebrities are no exception to this Celebrities like Amitabh Bachchan, Shah Rukh Khan, Salman Khan, etc. believe in Luck of numbers. They have their all car numbers same related to their birthdate or any other reason. Some of them also have mobile number, email, car number to have the same number in it.

In this blog we are gonna have look at some of the famous Bollywood celebrity’s unique car numbers and logic behind it.

Call him ‘Angry Young Man’ of Bollywood or ‘Big-B’. Padma Shri, Padma Bhushan, Padma Vibhushan, 4 times national film award winner Mr. Amitabh Bachchan. He owns cars like Rolls Royce ,Bentley, Porsche Cayman, Mini Cooper & many more. His birthdate is 11th October 1942. He believes that 2 is his lucky number as the sum of birthdate is ‘1+1=2’. So many of his cars having RTO number plate having number ‘2’.

‘Badshah of Bollywood’ or ‘King Khan’ or ‘Romance King’ whatever you call it he is the king Indian Cinema. Shah Rukh Khan is another big name in Bollywood. He is self made Superstar. He also received Padma Shri – Civilian Award from Government of India. He is one who is strong believer of numerology. He owns cars like Bugatti Veyron, Mercedes, BMW, Bentley, Audi and many more. As Shah Rukh khan is numerology believer all his car numbers are having ‘555’ in it. It is said that khan like number 5 and many of his staff members and close one family member and friends have number 555 in their official mobile number. Shah Rukh Khan have 555 in his official e-mail address as well.

‘Mr. Perfectionist of Bollywood’ or ‘Tom Hanks of India’ is none other than Mr. Amir Khan. Amir Khan is known for his selection of films and perfectness in the every field of film making. He is brilliant actor. He is also Padma Shri awardee. He has car collection with many super cars Mercedes Benz S-600 Maybach Guard, BMW 6-Series, Rolls Royce Ghost, Range Rover Vogue, etc. Many of his cars have number plate as number ‘1’. Rolls Royce number plate having as number 1 . This number is requested by Amir Khan and given by the Satara district RTO on special request. It looks he is also believer of Numerology !! He is also having Car with number 007 .!!

‘Bhaijan of Bollywood’ or ‘Bhai’ or ‘Sallu’ or ‘Tiger of Bollywood’ is none other than Salman Khan. He has huge fanbase in India. He is famous for giving Block Buster back to back hits in cinema. He has been part of many controversies. He is writer, director, singer actor, producer and also the host of ‘BigBoss’.He is also believer of numerology. He has cars like Mercedes Benz GL-Class, BMW X6, Audi RS7, Porsche Cayenne GTS and many more. All his cars has number plate as ‘2727’. As his birthdate is 27th December 1965, he believes that 27 as his favourite and lucky number.

Ranbir Kapoor is one of the highest paid actor In Bollywood. Ranbir has given excellent performance in every movie. He has given some brilliant performance every film. Ranbir is one of the gem of Bollywood. He is also strong believer of numerology. His car collection include scars like Audi A8 and Audi R8. He has affection with number 8. (According my logic or my knowledge as his mother’s birthdate comes as on 8th July.) All his cars have number plate as number ‘8’ on them.

We all know Shahid Kapoor for Playing character of (in and as) Kabir Singh movie. He is one of the most versatile actor in Bollywood. He has done brilliant acting in all the movies. He has done all the different kinds of movies and played all the characters with grace. He is great believer of numerology so has decided number 7 as his lucky and favourite number. He has something special connection with number 7. His birth date is 25th Feb 1981. Number 2 and number 5 adds to 7. Shahid Kapoor owns cars like Range Rover Vogue, Mercedes ML-Class, Porsche Cayenne GTS, etc. bikes like Ducati Scrambler 1200, etc. has number plate having ‘7’ as number.