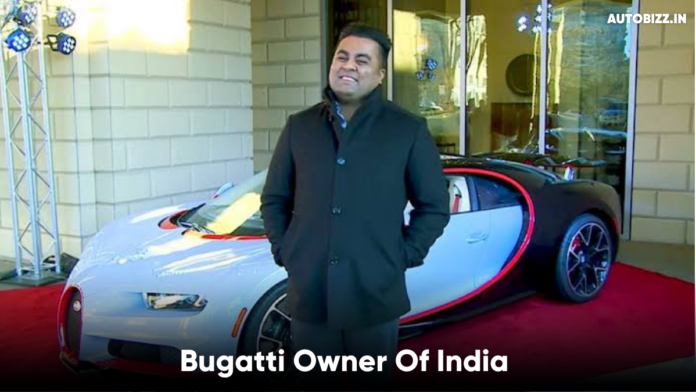 Sneak Peek Into Some Rare Bugatti Collector Of India

India is a country with one of the largest populations in the world and can you guess the number of modern Bugatti cars in the country? ZERO. That’s right, there is no Bugatti hypercars location in India but there is an Indian who owns a Bugatti.

The Bugatti Veyron is one of the most iconic cars in the world, or better say hypercars in the world. Talking about the manufacturer’s presence in India, Bugatti made its Indian debut in 2010 and brought a black Veyron which was used to give test drives to interested clients. The images here from Car Crazy India‘s Instagram page shows the same Bugatti Veyron being driven on the roads of Mumbai for the very first time. However, it didn’t find any buyers in the country despite Bugatti conducting multiple test drives for prospective customers.

Today in this article letting you know which are those Indian who owns this rare hypercar. So without any delay let’s get it on.

Mayur Shree is the only Indian who owns a Bugatti Chiron, the most expensive production Bugatti ever made! Here are the details of the Chiron and a few other exotic cars that he owns in Dallas, USA. Only 100 Buggati Chirons on the entire planet, which means super exclusive. The most expensive production cars has approximate price tag of around Rs. 21 Crores. However, the car here, owned by Mayur Shree seems to have a customised paint job and we are not sure about the other options that he bought as extras.

Moving forward, the another Bugatti owner has no need a introduction the brand Reuben Singh. The Indian-origin Sikh man from UK is known for his uber lifestyle and for matching his turbans with his fleet of Rolls Royce cars. Rueben Singh he is also a proud of a red-black Bugatti Veyron 16.4, as per Cartoq. He owns this Hypercar in red-black shade and remain inside his expensive garage, although whenever this car comes out of the garages pictures goes on viral on the internet. However, nobody knows the exact how much exact figure he spend on this but the base price for this spectacular machine is about Rs 9.8 crores in the UK.

Not to be confused with the Indian actor, Rohit Roy is a Dubai based businessman and son of Dr. CJ Roy, founder of the Confident Group that is one of the biggest real estate companies in Dubai. Once Buggati in the garage no other car can compete to his whooping price which makes the Bugatti the most expensive car in the collection. This is unique looking Bugatti Veyron with custom chrome and electric blue paint scheme. The car has been spotted several times on the roads and it sure attracts a lot of attention and king family paid almost $1.3 million which is equivalent to Rs. 13 Cr to got this machine.

Back in 2010 MF Hussain bought Bugatti Veyron. M F Husain, India’s highest paid painter buys Bugatti Veyron. Although he bought this car in Dubai, by unfortunately just after a year he he passes away. As a facts, a single canvas of India’s highest-paid painter has fetched up to $2 million at Christie’s auction. He also owns other supercars like Ferrari 612, Morris 8 Vintage car which was later auction after the death of artists.

Jehangir Ratanji Dadabhoy Tata was an Indian aviator, industrialist, entrepreneur and chairman of Tata Group. Similarly he also expired in 1993, he is a avid car guy and quite passionate about speed, thus he bought the fastest Buggati at the time.

In a recent #AskSRK session that was conducted on the actor’s Instagram page, the 52-year-old actor responded to a series of questions ranging from his personal life to his movies to the fact that does he own the Bugatti Veyron or not. Well, a simple ‘No’ has finally sufficed as an answer to this long tingling question.