HomeCar NewsChina And US Are Largest Car Markets In 2021, Italy Falls From...
Car News

China And US Are Largest Car Markets In 2021, Italy Falls From Top 10 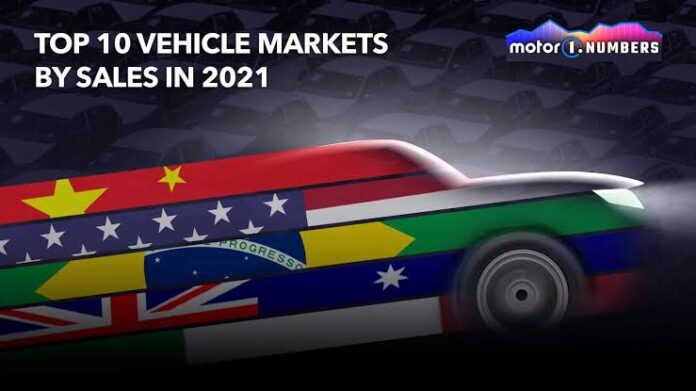 Volatility in manufacturing is affecting all major markets.

The pandemic, semiconductor shortages, and the continuous push for electrification have resulted in some fascinating data concerning the global automobile market in 2021. While the global total climbed by 5% to roughly 82.1 million units (passenger cars, vans, and light commercial vehicles included), not every country saw a rise. And that’s still lower than the pre-pandemic high of 89.6 million cars in 2019. Let’s have a look at some figures.

With 26.3 million automobiles, China remained the largest market, up 4% from 2020 and 6% from 2019. Due to a substantial push from the central government, which has made electric cars more affordable, China’s production troubles haven’t been as severe as in other regions. China’s auto industry has been the big winner from the crisis that began to hit global markets two years ago.

In the United States, however, this is not the case. Despite a little improvement in 2021 (up 4% from 2020), the 15 million units sold were still well below the 17 million in 2019. As the figures show, unlike China and Europe, this market has yet to gain from the increase in EV sales. Pure electric vehicles accounted for only 3% of the market in 2021, whereas they accounted for 11% in China and 10% across Europe.

However, as European countries will attest, the EV growth was insufficient to counteract the detrimental impacts of the previous several years. Between 2019 and 2021, the number of light vehicles registered fell by 25%, or 4.04 million units. Historically, the European vehicle market was similar in size to the US market. However, that has changed with the gap jumping from 1.15 million units in 2019 to 3.2 million last year.

Italy Falls From The Top 10

Difficulties in Europe’s primary markets account for the drop. For example, Italy, which was historically among the top 10 largest vehicle markets in the world, came out last year in 12th position behind Russia. In 2019, Italy was 9th in the market with nearly 2.1 million units, behind Brazil at 2.68 million and ahead of Canada at 1.93 million.

It’s a similar story in Germany, France, the United Kingdom, and Spain, which all show declines between 22 percent and 31 percent between 2019 and 2021. Despite the difficulties, Germany, France, and the UK still rank in the top 10, with Germany the leading European nation in the 5th spot.

The emergence of EVs across Europe is boosted by various government incentives, but that doesn’t necessarily reduce EV prices enough for them to be serious internal-combustion alternatives. Tighter emissions regulations also factor into EV production, but higher EV prices could leave a lot of buyers holding the bag, unable to afford a new electric car under the current conditions.

The situation is much better in other markets such as South Korea, Chile, and Turkey. In fact, South Korea literally swapped places with Italy over the last two years, climbing from 12th to 9th. Chile was able to cope better with the crisis because it has no local industry; everything is imported. This is the main reason why it overtook Argentina and became the second-largest market in South America. Argentina has 2.4 million more inhabitants than Chile.

Turkey jumped from 25th in 2019 to 18th last year, overtaking South Africa, the Netherlands, Saudi Arabia, Poland, Belgium, and Thailand. The reason? As happened in 2020, new cars have become a safe commodity for saving money and protecting against the strong devaluation of local currencies.

The author of the article, Felipe Munoz, is the Automotive Industry Specialist at JATO Dynamics.