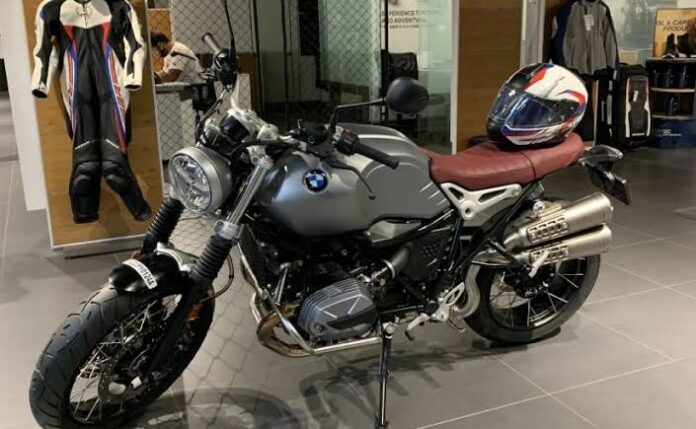 Vetrimaaran, one of Tamil cinema’s most prolific filmmakers, is noted for his great work. We had no idea, however, that the director like his equipment to be quick and strong as well. The filmmaker, who is known for films like as Adukalam, Vada Chennai, Asuran, and Polladhavan, among others, recently bought a BMW R nineT Scrambler, which has gone viral on social media. The BMW R nineT Scrambler is the Bavarian manufacturer’s retro-styled offering, and it costs Rs. 16.75 lakh (ex-showroom, India).

The BMW R nineT Scrambler, based on the R nineT, is a more ruggedized version of the R nineT. The comfortable seating position, brown-finished leather seat, and high-mounted dual exhaust give the bike a unique Scrambler aesthetic. Granite Grey Metallic is the colour chosen by Vertirmaaran, however you may also choose from Black storm metallic/Racing red, Cosmic blue metallic/Light white uni, and Kalamata metallic matt. The design is similar to the normal R nineT, but with the boxer engine protruding, it’s an instantly recognisable motorbike.

The BMW R nineT Scrambler is powered by a 1170cc twin-cylinder, air/oil-cooled boxer engine that produces 108 horsepower at 7,250 rpm and 116 Nm of peak torque at 6,000 rpm. The motor is connected with a shaft final drive and a 6-speed gearbox with a hydraulically controlled clutch. The motorcycle’s peak speed is 200 kmph, and the electronics package includes two rider modes (Rain and Road), cornering ABS, and traction control.

The BMW R nineT Scrambler rides on 43 mm telescopic forks up front and a monoshock in the back, with 320 mm dual disc brakes up front and a 265 mm single disc brake in the back. The Scrambler has a 19-inch front wheel and a 17-inch rear wheel, which is smaller than the normal R nineT. Where there isn’t tarmac, the Scrambler promises to mush it out better, and we hope Vetrimaaran makes the most of his new toy.

The five-time National Award-winning filmmaker has a busy schedule ahead of him. He is now working on Viduthalai, a film starring Soori, Vijay Sethupathi, and Gautham Vasudev Menon. He will next take command of Vaadivasal, a game modelled on the traditional Jallikattu sport. Vetrimaaran has a number of web series under his belt, and he is now producing Adhigaaram, a film starring actor Raghava Lawrence.