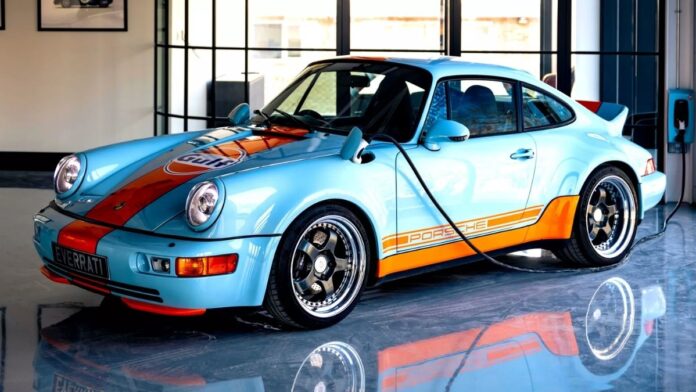 Everrati, the British company known for its electric conversions of old Porsches, is expanding its 911 EV programme to the United States.

Everrati North America was recently formed in Calabasas, California, but rather of sending out completed $350,000 automobiles imported from Europe, the firm will now manufacture vehicles in the United States for American consumers.

Everrati is collaborating with Aria Group, a company that specialises in low-volume manufacturing and composites, to make this possible. You may not recognise the name, but you’ve undoubtedly seen its work. Aria, based in Irvine, California, has designed cars for Porsche resto-mod veteran Singer and newcomer Radford, a sports car company sponsored by former Formula One driver Jenson Button.

Everrati claims that the majority of its customers are millennials and Gen-Zers who like the company’s combination of traditional style with current EV technology. The cars are based on the 964-generation 911, which was produced between 1989 and 1994, and come in coupe, targa, and convertible body styles with narrow or wide Turbo-style arches. There’s also a Gulf Edition with the famed oil company’s traditional orange and blue livery, which is fully licenced.

Those figures look impressive when compared to the 247 horsepower (250 PS) a 964 Carrera produced when it was new, as well as the 5 seconds it took to reach 60 mph, though there’s no doubt you could travel further on a full tank of gas in an original than you could using the EV version’s 53 kWh battery pack.

For a narrow-arch 964, costs start at $260,000 plus taxes and the cost of a donor vehicle, and go up to $325,000 plus extras for a wide-body Signature-spec variant. Everrati claims the first car is now being created and will debut during this year’s Monterey Car Week in August, and that as the company expands, other models will be made in the United States. That means the electric Mercedes SL, Superformance GT40, and Land Rover Series IIa, all of which are now available in the United Kingdom, will be accessible in North America soon.