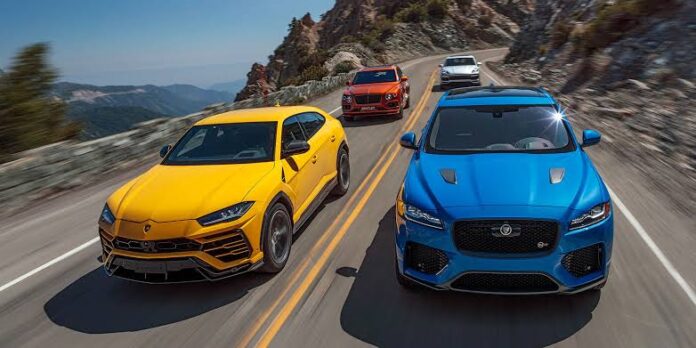 Top 5 Fastest SUVs In The World

SUVs are currently the hottest car segment. Its no new how the craze for the biggies have grown in past few years. These SUVs are surprisingly quick when speed restrictions don’t apply and the road is long and straight, despite curb weights of approximately 5,000 pounds and aerodynamics that suffer owing to their sheer bulk. In todays post we will tell you about top 5 fastest production SUVs exist on the planet.

Porsche manufactures a Cayenne that is even quicker than the Turbo S E-Hybrid version. It’s known as the Turbo GT, and it’s exclusively available in the Cayenne Coupe body type. The Turbo GT’s 4.0-liter twin-turbo V8 produces 631 horsepower and 626 pound-feet of torque, allowing it to reach 186 mph. It’s also the joint-quickest SUV on our list up to that point, clocking in at 3.1 seconds to 60 mph (quick refers to acceleration, while fast refers to peak speed). The Turbo GT’s quarter-mile time of 11.6 seconds is identical to that of the more powerful Jeep Grand Cherokee Trackhawk, however the Turbo GT established a Nurburgring lap record.

Uniquely Italian aesthetics, thunderous powertrains, and V-8 engines that deliver incredible performance. At the upper end, the Trofeo is really quick. The Trofeo will ultimately hit 187 mph thanks to its 3.8-liter twin-turbo Ferrari-derived V8 engine. That’s what 580 horsepower and 538 pound-feet of torque can accomplish for you, and it also sounds great when utilised in fury. The Levante lacks polish in comparison to its competitors, but its spine-tingling exhaust noise and enthusiastic driving behaviour will help car fans forget its shortcomings.

The thought of a Lamborghini SUV seemed previously absurd, but once behind the wheel, the Urus has a knack of putting any naysayers to rest. It has a 4.0-liter twin-turbo V8 engine that is shared with several Audi cars, but the Urus gets the full 641 horsepower and 627 pound-feet of torque. Lamborghini has also managed to create an athletic SUV – the Urus is a riot in the curves, with snappy steering and shocking balance for a vehicle of this size and weight. It will hit 189.5 mph on a straight road.

The Bentayga is not only fast but also one of the most comfortable car on the list, but it’s also close to being the quickest. The huge 6.0-liter twin-turbo W12 engine is primarily in the background, but its 626 horsepower and 664 pound-feet of torque are not to be underestimated. The Bentayga Speed will top 190 mph in a straight line, narrowly edging out the Urus. While the Dodge and Jeep at the top of the list make a lot of noise as they get closer to their peak speeds, the Bentayga Speed is a far more pleasant means of breaking the law.

The DBX707 shares the fastest acceleration with the Cayenne Turbo GT, clocking in at 3.1 seconds to 60 mph. The 4.0-liter twin-turbo V8 produces 697 horsepower and 663 pound-feet of torque and is mated to a new nine-speed wet clutch gearbox. EVs, like as the Tesla Model X Plaid, are faster off the line, but they run out of gas at greater speeds, and the DBX707 will soon pass it. The Aston Martin is currently the world’s fastest SUV.

Florida Porsche 911 Driver Weaving Through Traffic Loses It And Crashes