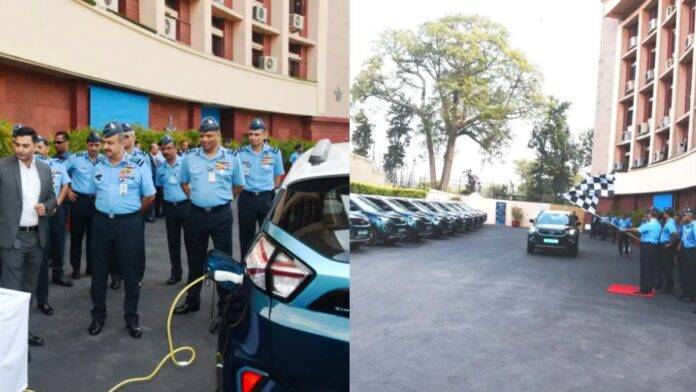 The Indian Air Force recently introduced a fleet of Tata’s highly popular electric SUV, the Nexon EV, to begin the electrification journey of Indian defence vehicles. The addition of Tata Nexon EVs to the IAF fleet aims to advance the use of EVs in defence. The Indian government intends to implement green mobility in all branches of the Indian armed forces. According to a recent press release from the Ministry of Defence, the first batch of electric vehicles has been placed in Delhi NCR units for performance evaluation and monitoring.

The first batch of twelve Tata Nexon EVs were flagged off at the Air Force headquarters, with Chief of Air Staff Air Chief Marshal VR Chaudhuri in attendance. The Ministry of Defence stated in a press release that they are focusing on improving the ecosystem for electric vehicles as well as using them. As part of this, charging infrastructure has been installed at various Air Force bases.

The ministry stated, “The Indian Air Force intends to gradually increase its use of electric vehicles by procuring e-vehicles in place of degraded conventional vehicles.” “Also planned is the expansion of the e-vehicle ecosystem, including the installation of charging infrastructure at various Air Force bases.” “To create a standardised inventory of vehicles, IAF has already joined hands with Indian Army in the ongoing procurement of Electric Buses and Electric Cars,” it went on to say. These proactive measures reaffirm the IAF’s commitment to the National goal of transitioning to environmentally friendly mobility.”

The Bajaj Avenger 220 has been altered to resemble an Indian Scout.