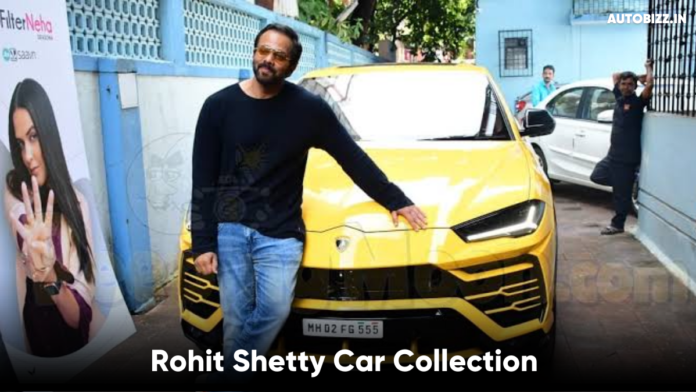 Ratna Shetty and M. B. Shetty are the parents of Rohit Shetty Both of his parents were junior artists in Bollywood and now their son, Rohit Shetty is one of the favorite directors and producers of Bollywood. This man loves the Police forces and made many films based on this subject.

Rohit’s latest film Sooryavanshi is stuck in pandemics they completed the film in 2019 but still got no released in cinema theatres. Rohit is also the host of the reality adventure show Khatro Ke Khiladi Season-11.

Simba, Singham, Golmaal, All the best: Fun begins, Bol Bacchan, Dilwale, Chennai Express, etc are Rohit Shetty’s famous Bollywood movies. He is popular for using the action of cars in his all movies. He really likes to flying big cars, he has some different obsession with car spank on each other. The action director uses Mahindra Scorpio as one of his favorite cars to get damaged and destroyed.

According to several reports, Rohit Shetty Net Worth in Indian rupees is 282 Crore, approximately $39 Million US in 2021. He is one of the highest-paid directors in the Bollywood Industry. Rohit Shetty’s monthly income is 3 Crore+ which makes him the top celebrity in India.

You May Like:  Future Japanese Electric Sports Cars, Trucks & SUVs

Born in Mumbai, director Rohit Shetty had any super-fantastic cars in his garage. Ranveer Singh and Rohit Shetty are good friends. They bought the same car Lamborghini Urus but different in color. Rohit had yellow Urus and Ranveer had red in color. Kartik Aryan recently had this beauty in his garage.

So this car has a power generating capacity of  478 kW and the max speed is 305 kmph. The best acceleration performance from 0-100 kmph is in 3.6 sec.

The film industry shares a special love for the Ford Mustang. To such an extent that when the Ford Mustang GT dispatched in 2016, Rohit Shetty got himself a customized one.

It looks like Rohit is the one of Indian Bollywood celebrities to own this beautiful roaring machine. Rohit Shetty cars collection has Maserati GranTurismo Sport. The car has 4.7 lit. V8 engine and 460 BHP power.

It will be great if the cinema is made on favorite cars of Bollywood of all time and can be the best grossing cinema titled ‘Bollywood and Range Rover cars’. Ranbir, Amir many big stars, and celebrities own Range Rover Vogue. Rohit also owns one of car his car has a red and black color theme which make his car look different from others.

Range Rover Vogue is one of the dashing-looking cars from Land Rover. The Range Rover Vogue comes as a 3.0-liter petrol engine producing 394 BHP along with 8-speed automatic transmission. It accelerates 0-100 kmph in 7.4 Seconds. The top speed of the car is 209 kmph. It costs around 2.11 crores.

In the list of Shahrukh Khan, Alia Bhatt, Anil Kapoor, Kajol, Riteish, and many Khatro Ke Khiladi, Host Rohit is also a proud owner of this beautiful BMW series 7. It’s a perfect limousine long-wheelbase type car and very comfortable features which made it famous among all film industries including Hollywood. BMW series 7 is powered by a 6-cylinder Twin-Turbo engine with 8-speed automatic transmission, the car can go from 0-100 kmph of speed in 5.6 seconds.

Does Rohit Shetty have a Lamborghini?

Back in 2019, Shetty invested in Lamborghini Urus worth Rs 3 crore. … With its distinctive silhouette with a dynamic flying coupé line, Urus is the perfect masterpiece he needed”.

Who has Lamborghini Urus in Bollywood?

Rohit Shetty, who loves flying and exploding cars in his movies, was one of the first from Bollywood to get his hands on this Lamborghini Urus. Interestingly, Rohit Shetty’s car was borrowed by Ranveer Singh for a couple of days – the man was probably testing it out before he bought one for himself.