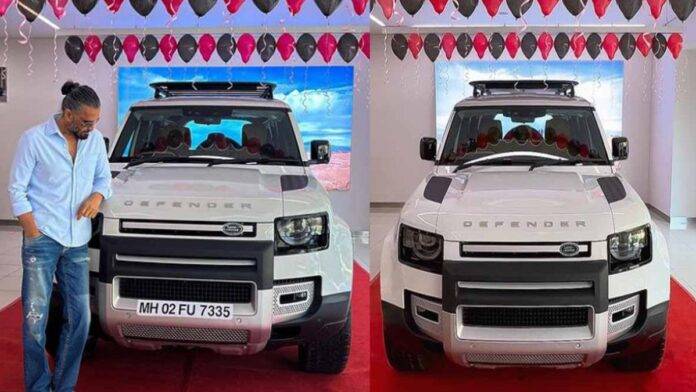 Bollywood stars are frequently seen driving around in luxury cars. As part of the celebrity lifestyle, most have their own collection of stylish cars. Suniel Shetty is one of the actors who is a big fan of SUVs. He already has a Mercedes Benz G350D off-roader, a Mercedes Benz GLS 350, a Jeep Wrangler, a BMW X5, and a Hummer H2. Suniel Shetty has now added a brand new Land Rover Defender 110 to his collection. There is currently no information on the variant details.

The popular SUV comes standard with four-wheel drive in all variants. All three engines come standard with a ZF 8-speed torque converter automatic transmission. The Land Rover Defender SUV was designed from the ground up to be a dedicated luxury off-roader. The latest generation model has a long wheelbase of 1100 inches. It has a 5-door layout and is quite large. While the longer wheelbase has an effect on off-roading, it is very useful for everyday use. In comparison, the Defender 90 has a 90-inch wheelbase and a three-door layout. The Defender 130, on the other hand, has a massive 130-inch wheelbase. It has seating for seven people.

The premium SUV is extremely popular all over the world. It can also be found in the garages of many celebrities from the entertainment industry in India. Malayalam megastar Mammootty, Sunny Deol, Arjun Kapoor, Ravi Teja, Aayush Sharma, and Prithviraj are among the notable owners of the Land Rover Defender. Many businessmen and politicians also favour the cult SUV. This includes industrialist Mukesh Ambani, Tamil Nadu Chief Minister MK Stalin, Indian Express heir Viveck Goenka, and Kanyakumari MP Vijay Vasanth. Suniel Shetty’s collection corresponds to his on-screen persona as a macho action hero.