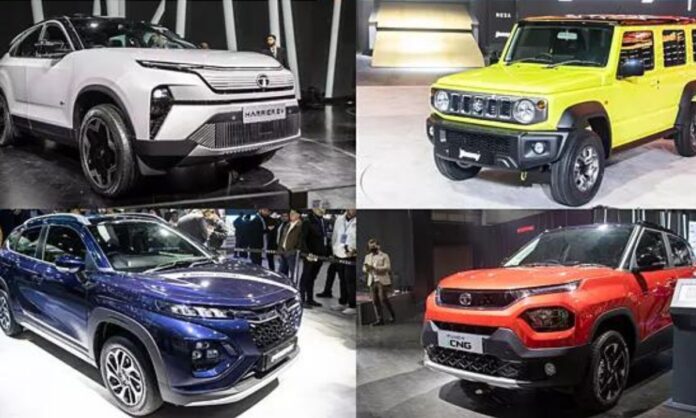 The 16th edition of Asia’s largest automobile expo, the Auto Expo, attracted a great number of automakers from across the world. Many automobiles were unveiled for the first time, while a couple were released. Here is a list of the five most popular vehicles on display at the Auto Expo 2023.

The eagerly anticipated Jimny was unveiled for the first time in India at the Auto Expo 2023. The brand’s only SUV with an AllGrip Pro 4×4 system will be introduced in India later this year. The Jimny will be available in two models and seven colour combinations. Bookings have begun for a nominal fee of Rs 11,000 per.

With the introduction of the Fronx small SUV, Maruti has increased its SUV line in the nation. At the Auto Expo 2023, the Fronx was on display alongside the Jimny. The SUV will be available in five different configurations and nine different colours. The Fronx will be available with two petrol engines: a 1.2-litre K-Series Dual Jet and a 1.0-litre K-Series turbo petrol engine.

Tata Motors drew a lot of attention at the Auto Expo 2023 by revealing the Harrier EV. The showcase vehicle was a futuristic concept EV with a fully redesigned front. The Harrier EV will be powered by a newly built electric platform that outperforms the Nexon EV in terms of power and range. The company has not released any details yet, but we anticipate that this electric SUV will be available in the Indian market shortly.

At the Auto Expo 2023, Tata Motors also displayed an improved version of the Tata Sierra EV concept with the Tata Harrier EV and Tata Curvv ICE. The demonstration vehicle was a five-door model with lounge seats. The technical specifics are being kept under wraps for the time being and will be divulged at a later date.

Tata Motors has unveiled two CNG variants. Along with the Altroz CNG, Tata unveiled the Punch CNG for the first time in India at the expo stage. The Punch has a first-in-India twin-cylinder technology with two 30 litre cylinder tanks. The Altroz CNG, on the other hand, will remain based on the Alfa platform. The model specifics have yet to be published by the company. These vehicles are expected to be unveiled in the coming months.