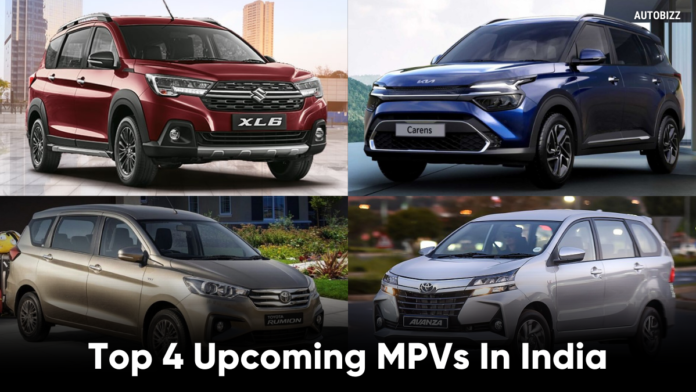 In this article, we talk about the list of top 4 upcoming new MPVs (Multi-Purpose Vehicles) to be launched in the country in 2022 and 2023 – Kia Carens Korean automaker, Kia Motors will launch the Carens 3-row MPV in the country in February-March 2022.

Kia Motors, a South Korean automaker, will debut the Carens 3-row MPV in the country in February or March 2022. The new model will be built on a modified version of the Seltos SUV’s SP2 platform. The Kia Carens will be a tough competitor for the Mahindra Marazzo MPV. Premium, Prestige, Prestige Plus, Luxury, and Luxury Plus will be the five trim levels available for the Carens MPV. Six airbags, all-four disc brakes, and electronic stability control will all be standard on the MPV.

A 113bhp 1.5-litre normally aspirated petrol, a 113bhp 1.5-litre turbo-diesel, and a 138bhp 1.4-litre turbocharged petrol will be available in the new Carens. This is the same engine lineup found in both the Seltos and the Hyundai Creta. There will be manual and automatic versions available.

It’s likely to be built on Toyota’s DNGA (Daihatsu New Generation Architecture), which also underpins the worldwide Raize and new-generation Avanza. It will compete with cars like the Kia Carens and Mahindra Marazzo. Toyota’s hybrid technology will be used in the new MPV. The next Toyota MPV, like the mid-sized SUV, is planned to be shared with Maruti Suzuki.

Toyota will introduce the rebadged Ertiga and Ciaz in the country, similar to the Glanza and Urban Cruiser. The Toyota Rumion, a rebadged Ertiga, has previously been released in South Africa. The business has submitted a trademark registration in India for the Toyota Rumion nameplate, indicating that the vehicle will be released soon.

The Rumion is nearly identical to the Ertiga, with the exception of a few minor differences such as a reworked grille with a Toyota insignia and a black interior with wood trim. The same 1.5L 4-cylinder naturally aspirated petrol engine with SHVS mild hybrid technology powers it. This engine has a power output of 103 horsepower and a torque output of 138 Nm.

Maruti Suzuki will launch the updated versions of the Ertiga and the XL6 in the country in 2022. The updated models have already been spotted testing multiple times. The Ertiga will receive minimal changes in the form of slightly revised grille and bumper. The cabin design will remain the same.

The XL6 is likely to receive major design changes. Adding to it, the company is also planning to introduce the 7-seater derivative of the crossover-MPV. It will get a newly designed grille and alloy wheels. The cabin is likely to receive new seat upholstery along with a bunch of new features. It could also receive a new touchscreen infotainment system, which will also be offered on the Baleno facelift. Both models will continue to offer the 1.5L K15B petrol engine with a mild hybrid tech.