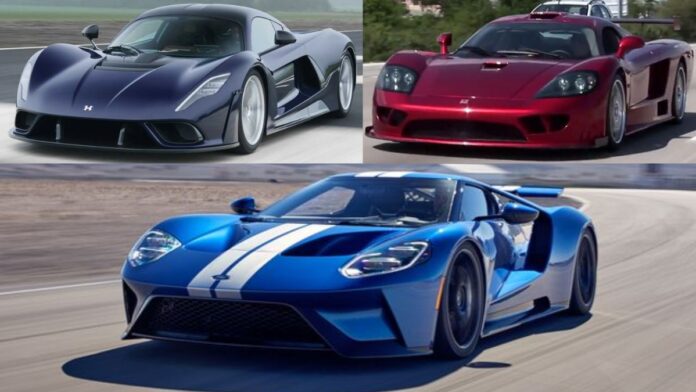 The name Saleen would be familiar to all cars enthusiast around the world. This giant beast is build for pure performance which becomes one of the first-mid engine American Supercars. It bought into current world on August 2000 as a rear wheel drive two-door coupe. It’s design got inspires from Mclaren F1. It powered by the 7.0 liter v8 engine with two turbos in the twin turbo model variant which provides 550 HP to 750 HP. Saleen claims a top speed of 248 mph. It also won several motorsports events like FIA GT Championships, 24 Hours of Le Mans, British GT Championships.

The history of Corvette has been amongst the fastest car on roads. They were more genre about their affordable front engine drive and large barn door which look less exotic than any other supercars in the market. No list of American supercars would be complete without mentioning it. It bought into production in 1953. It comes with a high performance 5.5 liter V8 engine which gives 670 horsepower. Z06 claims to cover 0 to 60 mph in 2.6 seconds. The dynamics of the cars were made splendid and the design was well weighted. Corvette C8 was the evidence that American too can built supercars in the world.

It was listed on one of the most expensive cars in the world. The fireball of hyper machine F7 is one for you. Formed by Falcon Motorsport in 2009 by Jeff Lemke beaten the supercars market in European nation by bringing up this American supercars for buyers. The unibody chassis design made up of aluminum, carbon-fiber and Kevlar made the car super strong. This demon got it’s power from 7.0 liter V8 engine which produce 620 HP and 585 Nm of torque. Falcon F7 is a rear wheel drive which can go from 0 to 60 mph in 3.5 seconds and claims top speed of 220 mph.

With a twin-turbo 6.6 liter V8 engine and 1817 HP Hennessey Performance Engineering launched the car into the world to beat some serious records. The legacy of John Hennessey baby marked the pillars of advance engineered hyper cars which is capable to drive at a speed of 300 mph. The petrol heads famous ‘Fury’ weigh only 1360 kg but beaten up the Bugatti Chiron in top speed. Venom F5 is limited to only 24 units out of which 12 are already sold by 2021.

This roadster was the dream of millions of teenagers who grew up in the late 80s and early 90s. The Vector W8 was designed to be the fastest road machine in the USA. Powered with twin-turbo Chevrolet V8 engine produces an insane torque of 625 HP. This car was ahead of it’s time in terms of design, engineering and style. Vector W8 production halt in the early 2000s but still remains as a classic unicorn car in the American history.

One of the most successful supercars of all time. Ford’s automotive history is so enriched with determination and positivity that gags every car enthusiasts towards it. This showed clearly to the world in the late 60s when American Car Manufacturer Henry Ford 2 beaten the Ferrari in the most prestigious motor racing in the world Le Mans Racing. Ford GT 40 which also called the legendary Ferrari killer managed to win 4 consecutive Le Mans Racing Titles. With excellent steering well compacted chassis and a slick six-speed gearbox GT 40 can produce 550 HP and can go from 0-62 mph in 3.8 seconds. Ford GT will remain as one of the best car in the history of Le Mans and in the USA.

It is one of the most famous supercars in the USA market. The car is the successor of ultimate aerodynamics and it was designed by ex-Ferrari designer Jason Castriota. This beast comes with 5.9 liters of twin-turbo V8 engine which generates 1750 HP. This high performance machine can cover the top speed of 286 mph in 2.5 seconds. It will remain as one of the biggest ambassador of supercars for the American automotive history.

Read More: Jaguar I Pace Burnt To Ashes In A Fire While Charging… 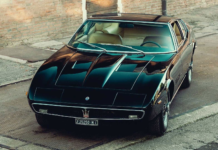