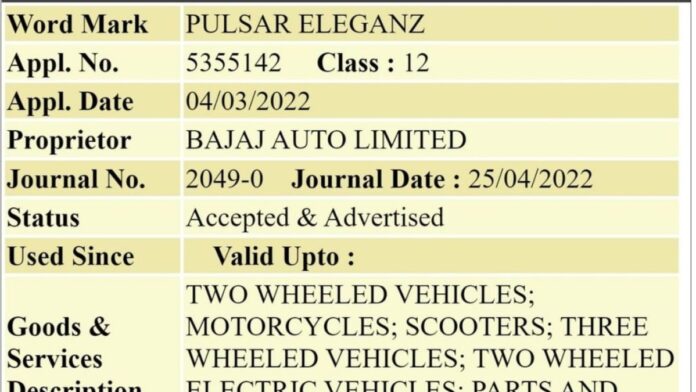 The names ‘Pulsar Elan’ and ‘Pulsar Eleganz’ have been trademarked by Bajaj Auto in India and are likely to be used for one or more brand new motorcycles. It’s not uncommon for automakers to trademark many names before releasing a new product, and it appears that Bajaj has a few in the works.

Bajaj had already trademarked a number of other terms, including Twinner, Freerider, Neuron, Fluor, and Fluir. On a production model, these names have yet to be utilized. The company appears to be aiming to add new models to its lineup, and it is looking into all of its naming options before doing so.

Bajaj is working with KTM on a 490cc parallel-twin engine that will be utilized on a number of forthcoming KTM motorcycles, including the 490 Duke, RC490, 490 Adventure, and 490 Supermoto/Enduro. Bajaj will most likely use this engine in a handful of its own models as well.

Bajaj has already used modified KTM engines on its motorcycles, such as the Pulsar 200 NS and Dominar 400. Using a new parallel-twin motor in the same way would enable the local two-wheeler company increase its presence in our market’s luxury motorbike segment.

Bajaj has also teamed up with Triumph on a series of retro-style motorcycles that will be released in the near future. The engine capacities for these upcoming cars will range from 200cc to 700cc, and a test mule has already been spotted on foreign roads. We’re not sure if Bajaj will release any models under its own brand as a result of this collaboration.

Eventually, Bajaj intends to increase its position in the electric transportation market. Bajaj is now constructing a specialised EV production plant in Arkudi, Pune, and we anticipate the launch of a new electric model in the near future.

Of course, all of this is simply conjecture. However, we expect Bajaj to reveal or tease details about its next models in the near future.