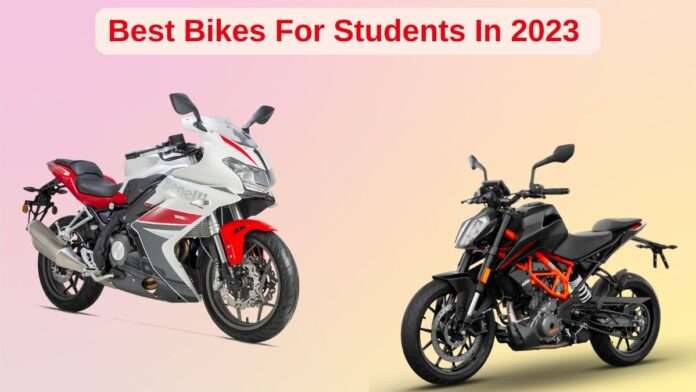 Best Bikes For Students Under 5 Lakhs In 2023 yes that’s what we will be covering today. The craze for biking is increasing in India. The purpose of the bike has transformed from daily commuting to weekend rides. Many young, college-going students need a powerful and attractive bike. So, if you are a college student who wants to buy a stylish & powerful bike and your budget is below Rs 5 lakhs, you should consider the bikes mentioned below.

Best Bikes For Students In 2023

Raptee’s first electric bike has been spied on and it looks closer to being production-ready.  The Raptee electric motorcycle slots in the performance-oriented e-bike segment in India. It gets an attractive-looking semi-faired and futuristic body design, similar to that of the Ultraviolette F77. The motor specifications are under wraps, but Raptee claims the EV can achieve a top speed of 135kmph and 150km of range, all the while doing the zero to 60kmph sprint in 3.5 seconds.

The product of Bajaj and Triumph’s alliance has been spotted testing for the first time ever. The sighting gives us an idea of the engine spec, suspension, and features of the upcoming bike.

Triumph’s upcoming entry-level bike, made in alliance with Bajaj, has been spotted testing. This, however, doesn’t look like the sub-Rs 2 lakh model and has quite a handful of premium components. We believe this model will be targeted towards the more premium sub-400cc neo-retro category, which includes the Honda CB300R and the BMW G310R.

Along with Triumph and Bajaj’s first roadster, a scrambler motorcycle has also been spotted for the first time. This will be Triumph’s take on the scrambler segment that’s been garnering the renewed interest of late.

A major distinction between the roadster-styled Triumph Bajaj 350 and the Triumph Bajaj Scrambler lies in the underpinnings. The Scrambler comes with a larger 19-inch front wheel, in contrast to the smaller 17-inch unit in the Triumph Bajaj 350. The rear wheels of both bikes are 17-inch units. In the scrambler, the alloys are wrapped in block pattern Metzeler Karoo Street tyres, which, coupled with the larger front wheel, should make it perfect for light trails. Oh, and for added protection, the bike also features a headlight guard, knuckle guards, and a bash plate.

In recent times, Harley Davidson has been working on developing a wide range of new entry-level models for its lineup. The iconic American brand joined hands with Chinese automaker Qianjiang, parent company of Benelli, a few years back for developing affordable small- and mid-capacity engines and platforms.

As seen from the latest spy shots, the prototype appears to be nearing its final production stage, courtesy of a number plate mount and turn indicators. There could be minute changes at the time of its launch like some more chrome touches which make it look more like a Harley Davidson. While the bike’s market launch is expected sometime in 2023, we can expect Harley to show a glimpse of this model at EICMA later this year. It is likely to rival Royal Enfield 650cc motorcycles.

The Benelli 302S is the model that will replace the TNT 300. As such, it retains a lot of the elements of the TNT300. It has a steel trestle frame, and a 300cc parallel-twin motor that generates 37bhp and 26Nm. A six-speed manual gearbox is standard – but there’s no word yet on whether a slipper clutch will be standard. Braking is courtesy of twin 260mm petal discs in the front and a single 240mm disc at the rear. Dual-channel ABS will be standard. Inverted front forks and a preload-adjustable rear monoshock make up the suspension. The fuel tank has a capacity of 16 litres, which is quite large for this spec of motorcycle.

A month after the images of the 2023 Benelli 302R leaked online, the Chinese brand has finally unveiled its entry-level supersport. The bike has been thoroughly updated and is slated to launch in India by the end of this year.

The highlight of this model is the new design. Replacing the halogen units from the older model is the vertically-stacked projector headlamp, flanked by LED DRLs on either side and new LED tail light. The bodywork gets air vents to help channel the air around better. Benelli has, however, retained the same 14-litre fuel tank and side panels.

The Hero XPulse 400 was spied testing along with the Xtreme 400S once again. This time around, the spy shots reveal new details of the variants. The XPulse 400 will reportedly be powered by a 421cc single-cylinder engine, and will go head-to-head with the upcoming Royal Enfield Himalayan 450 LC in terms of performance.

Based on the spy shots, the XPulse 400 appears to be rolling on 21-inch front and 18-inch rear spoke wheels like the XPulse 200. However, it is likely to get chunkier all-terrain rubber. The front beak looks to be stubbier than the XPulse 200. Apart from the Himalayan 450, this bike will also compete with the KTM 390 Adventure.

The company is testing the new 400cc engine with the Xpulse model and is also expected to power the upcoming Hero Xtreme 400S. Hero’s new model bike was spotted while being tested along with the Xpulse 400. The design cues are expected to be on similar lines as the 200 version. But, the most significant change will be in the form of a higher-capacity engine, advanced electronics, and premium features.