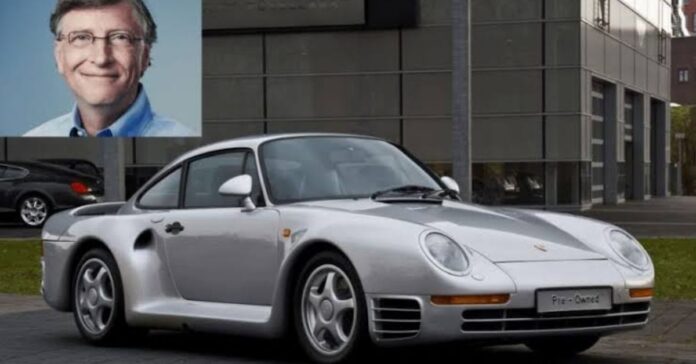 Bill Gates was the richest person in the world for moreover than 15 years. However, he currently holds the third position among the richest people in the world. In fact, based on his wealth and earnings of past years, he makes $1,300 per second. In this article, we have listed all the cars in his collection. Let’s have a look at the cars the co-founder of Microsoft Corporation drives.

With intellectual acuity Gates has become a successful entrepreneur and leading innovator in the world. From private Jets to a lavish 66,000-square-foot house he got them all. With wealth he has also got a heart of gold. He is been contributing to many noble cause in the world. Along with his wife he also run foundation and organisations to help people in need.

The Porsche 959 Sport was powered by a 2.8 L twin-turbocharged enginy offered with a 6-speed manual transmission. Notably it was this was the world’s fastest street-legal production car at it’s time of launch. And it was one of the first high-performance sports cars with AWD.

The Ferrari 348 is a mid-engine sports car. It is powered by 3.4 L Tipo F119 V8 engine mated to 5-speed Manual transmission. It is also one of the favourite car of Bill Gates. It’s said that he used to drive to through sands that eventually it was called ‘Dune Buggy’.

Bill Gates car collection clearly shows he is a Porsche enthusiast. The Porsche Taycan is an all-electric car. It is a truly innovative EV and made a place in his collection. It can go from 0-100 Kmph in just 3 seconds.

Also Read :Car Collection Of Will Smith | Will Smith Cars From Ghost to 65 Mustang