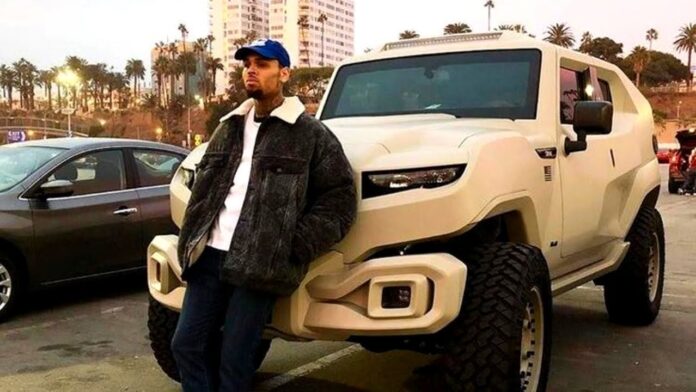 Christopher Maurice Brown (born May 5, 1989) is an American singer, songwriter, dancer, graffiti artist and actor. According to Billboard, Brown is one of the most influential and successful R&B singers ever, with several considering him the “King of R&B” alongside Usher and R. Kelly.His musical style has been defined as polyhedric, with his R&B being characterized by several influences from other genres, mainly hip hop and pop music. His lyrics develop predominantly over themes of sex, romance, fast life, desire, regret, and emotional conflict. Being described by media outlets and critics as one of the biggest talents of his time in urban music, Brown gained a cult following, and wide comparisons to Michael Jackson for his stage presence as a singer-dancer.

With Chris Brown’s net worth estimated to be $50 million, he is among some of the richest artists in hip-hop. However, he still has a way to go until he reaches the likes of Jay-Z, Dr. Dre, and P. Diddy.Chris Brown is an American singer, songwriter, and dancer from Virginia. He has been singing professionally since 2005, and several of his albums have been certified double platinum. He’s also had multiple songs featured in the Billboard Top 100.

starting with the Chris Brown Car Collection’s craziest car. The 8.0-liter quad-turbocharged W16 engine that powers this incredible Bugatti Veyron produces up to 1200 horsepower and 1106 lb-ft of torque. Veyron has an insanely quick 0-60 acceleration time of 2.5 seconds and a peak speed of 253 MPH. Additionally, it has a quarter-mile time of 10.2 seconds at a speed of 138 mph and can reach 100 mph in 5.5 seconds.

You May Like:  Anand Mahindra Full Car Collection | Most Humble Man

This is a unique car in Chris Brown’s collection which looks straight from the space. Rezvani Automotive Designs, an American company, designed and produced this stunning supercar from start to finish. Everything is created by Rezvani with the exception of the chassis, which is taken from the Arial Atom and Lotus Elise. The most exquisite and unique vehicle in Chris Brown’s collection is this one.

Chris Brown’s collection of crazy supercars includes another one. The 6.5-liter naturally aspirated V12 engine in the Lamborghini Aventador produces an astounding 769 horsepower and 531 lb-ft of torque. The engine is mated to a seven-speed automatic transmission with manual paddle shifters, which distributes the power to all four wheels. In addition, this beast has a peak speed of 217 mph and can accelerate from 0 to 60 mph in just 2.8 seconds.

Chris Brown owns a 911 which he has put on with white alloy wheels that look insane in the pictures. Under the hood of the 911 is a 3.0 litre flat six engine with twin turbochargers. The standard Carrera has 379 horsepower, the S has 443 horsepower, and the GTS has an astounding 473 horsepower. Every model comes with an eight-speed automatic gearbox, while the S and GTS variants continue to provide the beloved seven-speed manual. Rear-wheel drive is standard on the coupe and convertible variants, with all-wheel drive available as an option exclusively on the Targa.

The top-of-the-line Porsche 911 Cabriolet has an all-wheel drive system with increased traction control and stability, a 3.7 Litre twin-turbocharged six-cylinder engine, a standard eight-speed dual clutch automatic PDK gearbox, and all-wheel drive. and can go from 0 to 60 mph in under 2.7 seconds while producing a respectable total of 573 and 640 horsepower, respectively.

You May Like:  Sachin Tendulkar Car Collection & Net Worth

Bentley Bentayga is one of the greatest SUVs in the Chris Brown Car Collection. One of the most powerful, quick, and opulent SUVs in the world is the Bentley Bentayga. It is understandable why SUVs from premium companies like Bentley Bentayga, Lincoln, Cadillac, Mercedes Benz, and Lamborghini are more expensive or more opulent than those from BMW, Lincoln, Cadillac, and Lamborghini. The new 2022 Bentley Bentayga has all the luxury and interior options you’d expect from Bentley, as well as comfort unlike anything other. With no sacrifice to power, whether it comes with V8 or W12 engines, it can accomplish whatever you ask of it.

The Rezvani Tank was created with the idea of a pure driving experience in mind, and it was intended to be the most competent car both on and off the road.

An instant and lasting impression is created by the imposing Mercedes-Maybach grille, which has the upright Mercedes Star on the bonnet and the fashionable vertical bars. Discover more luxurious extras, including the roof liner’s ambient lighting, and travel in unparalleled luxury in each of the four opulent individual seats.

Chris Brown is a singer so we do see the low ride with those big wheels rolling from his garage. The Impala SS is one of the most storied muscle cars of all time thanks to its timeless, exquisite appearance and ground-breaking power and performance. The Chevrolet Impala SS was introduced in 1961, and the original model lasted through ten revisions.

An amazing outcome of that is that the R8 gave you everything you could possibly want from a flagship Audi. You won’t even need to spend a million dollars on it because it manages to give all that power for its six figure pricing. a 562 horsepower naturally aspirated V10 that is managed by. It sports a seven gear dual clutch automatic transmission and a specifically designed racetrack-inspired chassis that is tailored to make the most of every watt of power and transfer it to the vehicle’s rear or all four wheels.

The last car is his Porsche Panamera painted in blue with matching rims as well. There are several different Panamera models and engine options available. A 2.9-litre turbocharged V6 with 325 and 440 horsepower is the base engine.