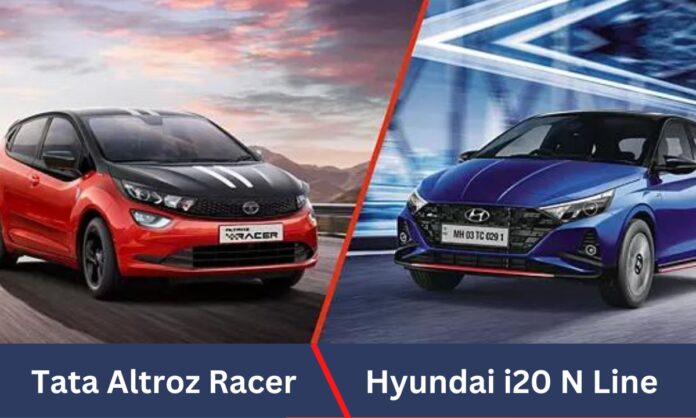 Hyundai debuted the N Line series in the Indian market with the i20 N Line to suit the expectations of customers who desire performance and sportier design, and it quickly became popular for doing so. Tata Motors is now preparing to launch the Altroz Racer, a sport variant of their premium hatchback, to compete with Hyundai’s offering. Both of these sportier models compete in the same premium hatchback class, and here is a short comparison of their characteristics.

Hyundai N Line is the market’s first vehicle, powered by a 1.0-litre TGDi turbo-petrol engine producing 118bhp and 172Nm of torque. There are just two gearbox options: an iMT or a seven-speed DCT. Furthermore, the vehicle can accelerate from 0 to 100kmph in 9.9 seconds.

Meanwhile, the Tata Altroz Racer is powered by a 1.2-litre Nexon turbo-petrol engine that delivers 118bhp and 170Nm of torque. At the moment, the Altroz Racer is rumoured to have a six-speed manual gearbox unit.

Design of The Exterior

The i20 N Line, as the name indicates, is supposed to seem sportier and more aggressive than the regular trim. The premium hatchback has a broad blacked-out grille with the N Line emblem, front red brake callipers, 16-inch dual-tone alloy wheels, a twin-tip exhaust, side sills, and red accents on the front and rear bumpers as well as the side sills to add to the overall sporty image.

To compete with the fastback i20 N Line, the Altroz Racer gains 16-inch black-painted diamond-cut alloy wheels, ‘Racer’ badging, dual-tone paint scheme with black-colored roof and hood with a contrasting dual white stripe over it, red inserts at various exterior elements, a shark fin antenna, and a shark fin antenna.

Though the i20 N Line was not assessed for safety, the basic i20 is a three-star GNCAP vehicle.

Tata Altroz Racer, on the other hand, is built on the same basis as the conventional Altroz. The premium Tata hatchback has the greatest five-star GNCAP safety rating in the market.

Although the Altroz Racer has not yet been released, we can expect it to cost between Rs 60,000 and Rs 90,000 more than the normal Altroz trim.

Mahindra Thar and Suzuki Jimny Seen Together For First Time Ever