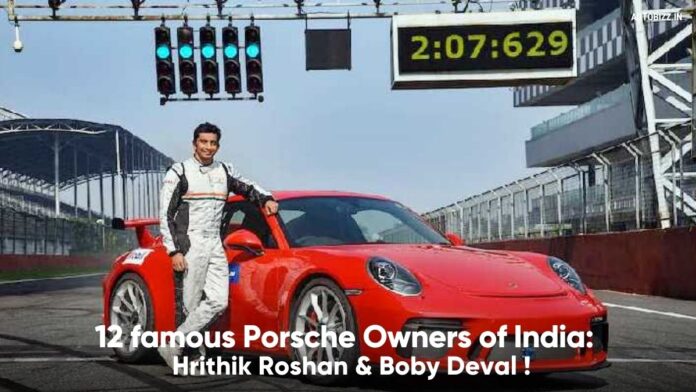 Buying a Porsche is one of those few car-buying decisions which are appealable to both hearts and minds. With a great combination of form and function, all Porsche cars, and now even SUVs, are the top picks of car lovers who admire the pleasure of driving. Here are some of the prominent Indian celebrities who have shown their admiration for Porsches by buying one from the desirable lineup on offer.

For his generosity and altruistic support during the COVId-19 times, Sonu Sood was one of those Indian celebrities who appeared as a saviour to many Indian residents. The Bollywood star drives a dark-blue first-generation Porsche Panamera diesel, which is powered by a 3.0-litre six-cylinder 250 PS diesel engine.

Moving on to Indian cricketers who own Porsches, the god of cricket, Sachin Tendulkar, is the most recent Porsche customer. Sachin is well-known for his taste in automobiles, with his most recent purchase being a silver-colored Porsche Cayenne Turbo. The 4.0-litre twin-turbocharged V8 engine in this fast SUV produces 550 horsepower. He has a Porsche Turbo S as well as a few other cars.

Suresh Raina may no longer be a member of the Chennai Super Kings, but at his prime, he had a yellow Porsche Boxster S that matched the team’s shirt. Raina’s Porsche Boxster S, which features a 3.2-litre flat-six petrol engine that produces 280 PS, was previously the most cheap convertible car from Porsche.

In India, Akshay Kumar is renowned as the “King of Action Films.” His garage is filled with unique vehicles, including a Bentley Flying Spur. Akshay also has a Porsche Cayenne, which he drives for business on a regular basis. For a long period, the Cayenne was the only SUV offered by Porsche before the Macan came.

Imran Khan, Bollywood’s chocolate boy, is known for having an eclectic garage. He’s had the Porsche Cayenne for quite some time now. Imran’s car has been his normal mode of transportation, and he drives the SUV on his own the most of the time.

Narain Karthikeyan, a former Formula One racer, recently purchased a 2018 Porsche 911 GT3. Narain has customised the vehicle to his specifications, bringing the final price to roughly Rs. 3 crores.

The Porsche 911 GT3 is a high-performance supercar with a 4-liter six-cylinder boxer engine. It has a maximum power of 493 Bhp and a peak torque of 540 Nm. A 7-speed automatic transmission is available, allowing the car to go from 0 to 100 km/h in approximately 3.4 seconds. A manual transmission is also available, with a 0-100 km/h time of 3.9 seconds.

Popular TV artist Ram Kapoor owns a slew of high-end automobiles including motorcycles and cars. He has an enthusiastic garage and last year, he picked up a Porsche Carrera S.

Bobby Deol has a good sense of style when it comes to automobiles. A shiny new Porsche 911 is the newest addition to his garage. We’re not sure which Porsche Bobby purchased, but it’s a 991.2 Porsche from the current generation. All of the model’s variations are now equipped with turbocharged petrol engines and cost between Rs. 1.31 crore and Rs. 2.64 crore. His scarlet Porsche is frequently seen on Mumbai streets.

Kapil Dev, the all-rounder, has a long list of achievements. In 1983, he also assisted India in winning the first-ever world cup. When Kapil Dev travels for work or pleasure, he travels in a variety of vehicles. The Porsche Panamera, a four-door luxury sedan, is his most expensive vehicle. The most of the time, Kapil has been seen driving the car by himself.

Yuzvendra Chahal, one of the most notable leg spinners of recent times, is another player who owns a new-generation Porsche Cayenne. Chahal gave his family a Porsche Cayenne a few years ago, which is done in a sophisticated shade of black. Chahal purchased a Porsche Cayenne S with a 3.6-liter V6 engine that produces 440 horsepower.

Farhan Akhtar, one of Bollywood’s most prolific and multi-talented artists, has a silver-colored Porsche Cayman GTS, which is easily the coolest-looking automobile in his collection. Farhan purchased this Porsche Cayman GTS in 2015, which features a 3.4-liter flat-six 340 PS petrol engine and a 7-speed automated transmission.

Hrithik Roshan, who is known as the “Indian Greek God” due to his attractive appearance, is one of the first members of the film industry to own a Porsche Cayenne, which looks as good as he does. Hrithik’s blue first-generation Porsche Cayenne is the base variant of the SUV, which used to come with a 3.2-litre six-cylinder Volkswagen family 250 PS petrol engine.