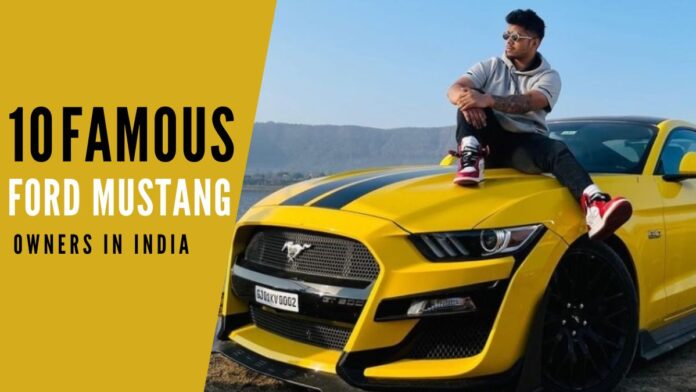 Ford introduced its most powered performance car Mustang in India in 2017. Till now the car has sold at its maximum peak in Indian market ahead of its competitors. This high octane vehicle costs more than lakhs but still managed to be bought by some famous celebrities of India. Let’s have a look at our 10 famous celebrities who are the proud owners of Ford Mustang in India.

So the Mustang is a sports car with very few flaws of one. Sure it is not perfect, but with that price tag, you get a lot of American muscle for your money. The Mustang has a rich heritage, is an icon and more importantly in the latest generation is an accomplished car too.

Dhanush is an award winning actor who works in Tamil Film industry. He is the proud owner of Ford Mustang in India. The actor who featured in the movie The Gray Man purchased the sixth generation model of this car in the year 2016. The iconic Black shade of Mustang GT defines the pure characteristics of owner. It cost him nearly 65 lakhs to be the proud owner of this vehicle.

You May Like:  Tesla Cybertruck Is Delayed, and We're Not Surprised

One of the biggest name of south cinema is Vijay Devarakonda which has given numerous hits at the box office including the commercial success of Arjun Reddy where he famously played lovelorn doctor which deals with anger management issues. Once asked by the interviewer about his dream car which he thought of buying in future, he replied saying that a Ford Mustang GT would an option despite of not buying a rich mansion. Later on, he bought his dream which costs him a whooping 75 lakhs of money to be the proud owner of Ford Mustang GT. His other collections includes Volvo XC 60, BMW 5 Series and Range Rover.

Famous action movie director of India, Rohit Shetty is also a proud owner of Ford Mustang. He likes to fly cars into his movies through the action sequences he direct for the audience in movies. He bought a royal matte blue-colored Ford Mustang GT in the late 2018. His car have some finest modifications like the RTR grille with integrated DRLs, Roush side scoops and rear spoilers and niche 20 inch sporty wheels and Cervini bonnet as stated by the design firm. His most recent purchase is a Lamborghini Urus which is worth of 3 crore rupees according to Indian currency.

The B-Town Nawab of Pataudi took his love for cars to the next level. He bought a Shelby Mustang GT 500 in 2008 when the Indian sports car market was just stepped in the shores. Saif loved being a proud owner of Ford Mustang long before the car officially entered the Indian markets. The red colored with white stripes and a 5.4 liter petrol engine Mustang defines him that he truly the Nawab of Bollywood film eternity. His Mustang delivers 500 HP and 651 Nm torque which was the fastest cars on Indian Roads in 2008s.

You May Like:  Ford May Return To India As EV Maker

India’s most famous PUBG gaming YouTuber has a whopping 38.9M active subscribers on his YouTube channel making him the most famous game streaming channel. Scout is a proud owner of yellow colored Mustang which costs him around 78 lakhs in India.

Famous Esports PUBG Mobile game caster K18 is also a owner or Mustang in India. Known as Ketan Patel by real name has more than 12 lakhs subscribers in his YouTube channel. Ketan owns on an orange-colored Mustang which is worth of 80 crores.

He is the India’s famous business tycoon from Hyderabad. His net worth estimated around 11 millions dollars and is famous for owing rich mansion and exotic cars. He owns a Rolls Royce, Lamborghini Huracan as well as Ford Mustang which burns out 760 HP and takes 6.6 seconds to cover60 kmph.

India’s famous cricketer recently bought a red colored Mustang after playing for Chennai Super Kings in IPL. He proudly owns a Mustang as it is special because he is one of the first Mustang owners from Andhra Pradesh region.

India’s famous Olympian sportsperson Neeraj Chopra needs no introduction. His winning attitude won him Gold Medal in Tokyo Olympic in 2011. He creates historic win for Gold medal for the country and is also feel proud a blue-colored Mustang which is spilt by two white stripes running all over the body from middle of the bonnet to the edge of the boot.

You May Like:  Maruti Suzuki Swift Based Small SUV In The Works

Ford Mustang is not just any other car. The ultimate muscles has a huge fan following way back in 1964. It is one of the finest car that every cult car enthusiast would dream of keeping it in his garage. So which Ford Mustang is your favorite ? Tell us in comment below.