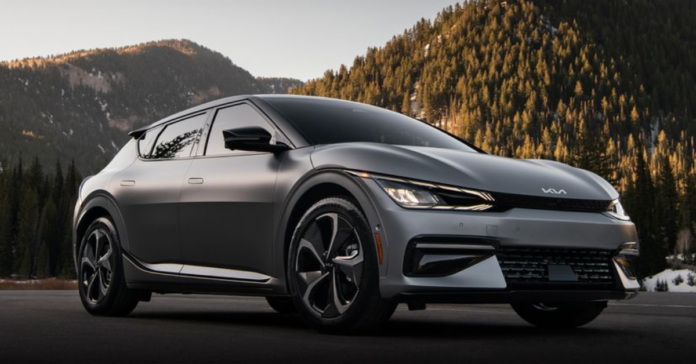 Kia is getting ready to unveil its first electric vehicle in India, and it is clearly the greatest EV on the market. The EV6 is a high-end electric car built on Hyundai Motor’s e-GMP platform and designed in accordance with Kia’s “Opposite United” design concept. It will be delivered to India as a CBU (Completely Built Unit), with just 100 units set aside for the Indian market at this time. Pre-orders will begin on May 26, with the official release date set for June. The Kia EV6 was spotted in Hyderabad, indicating that it would be released soon, and it’s possible that they wanted to assess the market.

The GT-Line variant with a twin e-AWD system and a 77.4 kWh battery, which offers a peak power of 320 BHP and a peak torque of 605 Nm, could be one of the specifications offered. This model is expected to have a range of around 425 kilometres on a single charge. A smaller battery pack, the 58 kWh battery pack, is also available in two configurations: rear-wheel drive (RWD) with 168 BHP and all-wheel drive with a dual motor system achieving 235 BHP.

The EV6 has a modern two-spoke steering wheel, an augmented reality head-up display, many ADAS safety components, a 12-inch display for the digital instrument cluster, and a touchscreen infotainment system.

Read More: Honda Jazz Could Be Wiped Out Of The Indian Market In 2023

Its introduction is set to take place soon after it was spotted on Indian streets, and it is expected to cost more than 50 lakh rupees (estimated). The EV6 is Kia’s first vehicle to be built on the company’s own battery electric vehicle platform (BEVs).

They want to build up a mid-to-long-term strategy for BEVs, plug-in hybrids (PHEVs), and hybrid electric vehicles (HEVs) to account for up to 40% of overall sales by 2030, with annual sales of 1.6 million units for the environmentally friendly models.