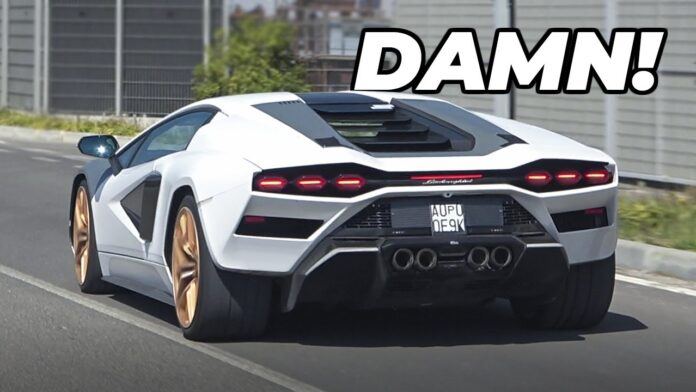 The 2022 Lamborghini Countach LPI 800-4 is a love letter to the crazy supercars of the 1970s and 1980s, and now we can hear it, courtesy to a video recording of the car leaving the production.

Varryx, a YouTuber, caught the supercar leaving the plant, where we can hear the 12-cylinder’s beautiful exhaust noise. Despite the fact that it does not have the same Bizzarrini-designed engine as the original Countach, we can’t help but think it sounds identical.

The engine is the same as the one found in the Lamborghini Aventador, but the Countach’s distinctive four-outlet exhaust gives it a distinct sound from the rest of the Lamborghini lineup.

This car looks to be a factory test prototype, since it has a different set of wheels and a grey hood panel. We doubt that the car was ordered in this configuration, but it would be lovely to see one in one of Lamborghini’s other 30 colours.

The driver definitely attempts to tone it down the second time he exits the factory to avoid unwanted attention – as if that was even possible in a Lambo.

The Lamborghini Countach LPI 800-4 will be produced in 112 units, each of which has already been sold.

Read more:- Did This Aston Martin Valkyrie Crash For Real?