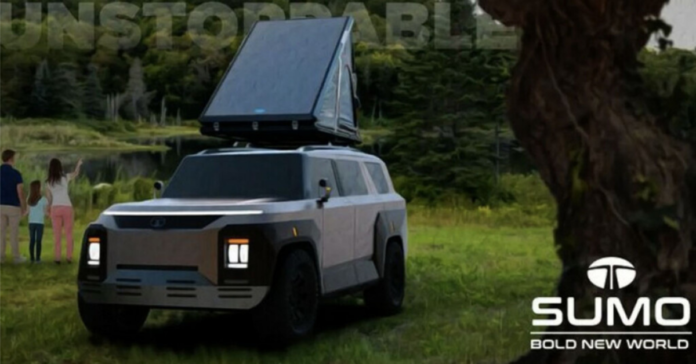 For a long time, the Tata Sumo was a legendary product in the Indian market, and for good cause. However, this take on the SUV could pave the way for its future.
This all-electric idea of the classic Tata Sumo suitable for a camping trip has been illustrated. The Sumo was once one of the most dependable and tough SUVs on the market until being phased out in 2019 due to a failure to meet the latest safety criteria. However, this computer rendering has given the people’s carrier a fresh lease of life. Omkarsurvedesign is the creator of this concept. Let’s have a look at the specifics of this redesigned all-electric concept.

With modern LED lighting, the idea has a rough and boxy form. The SUV’s bonnet has a strip of LED DRL spanning the length of it, the primary headlamps are down on the bumper, and the front end is totally sealed off, revealing its electric credentials. It has a rugged SUV image thanks to the skid plate and high stance. The sides have a minimalistic side appearance with no creases and black squared-off wheel arches.

The A and B pillars are black, and the third quarter is nearly completely separated from the rest of the vehicle. A bespoke tent sits atop the SUV, which can accommodate a few people for off-roading or camping outings. The side mirrors are camera-based, indicating the vehicle’s current design. If you look closely, the electric Sumo appears to be much larger than the conventional one. The paint colour is also extremely distinctive, and it goes nicely with the blacked-out areas.

The Sumo was previously equipped with a 3.0-litre diesel engine that produced 84 horsepower and 250 Nm of peak torque. A 5-speed manual transmission was paired with this powerplant. Even now, the SUV is popular as a people mover and in our country’s mountainous terrains, where cars must be sturdy and durable to survive. Sumo can withstand a lot of punishment, which is why it’s the preferred commercial vehicle in the highlands. The Tata Sumo used to sell for roughly Rs 6 lakh to Rs 9 lakh ex-showroom back in the day. Let us know what you think of the Tata Sumo’s all-electric modified concept version. 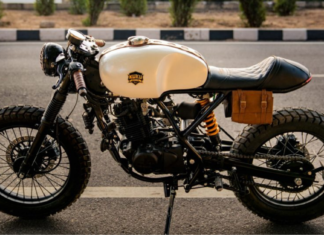 Contributor - May 19, 2022 0
Since its introduction, the Bajaj Pulsar has sparked an entirely new level of interest and fandom in India. Young people enjoy customising this bike...