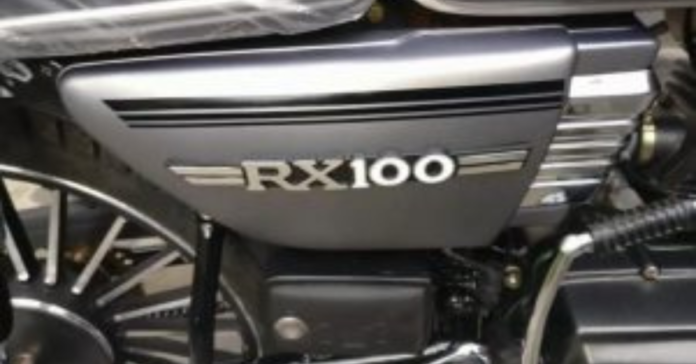 With its distinct exhaust note, the legendary Yamaha RX 100 can still be seen running around town. The enormous popularity of this bike prompted Yamaha to reintroduce the RX designation with the Saluto RX 110, despite the fact that it never achieved a realistic sales figure.

The Yamaha RX 100 you see here has had its body entirely rebuilt, as well as some aftermarket upgrades for improved functionality and good looks. This customisation is estimated to cost Rs 55,000, according to the modifier (excluding the donor bike). ‘Durga Spray Painting Works’ customised the RX100 Gunmetal Grey Edition for a client in Khammam, Telangana.

Dual projector bulbs with a circular LED DRL tube are housed in a matte black headlamp shell on the Yamaha RX 100 Gunmetal Grey Edition. The customised motorcycle has chrome/black alloy wheels as well as a stunning belly pan with a raised pattern for a striking appearance.

The fuel tank is Gunmetal Grey with black pinstripes and Yamaha marking, while the side panels are the same shade with RX 100 insignia. On the motorcycle, a brand-new seat with ample room for two riders has been placed. To maintain the integrity of the engine, the majority of the moving parts were preserved from the original model, and no front disc brake was fitted.

The Yamaha RX 100 is powered by a 98cc single-cylinder two-stroke engine that produces 11BHP at 7500 rpm and 10.4Nm at 6500 rpm. This puts the RX 100 on line with the performance spec-150cc bikes available in India in terms of power-to-weight ratio. The bike’s engine is connected to a four-speed transmission.

The RX 100’s peak speed, according to the manufacturer, is 100 kilometres per hour. The motorbike was produced from 1985 until 1996, when the government enacted tight pollution restrictions prohibiting the sale of two-stroke motorcycles in India. Yamaha has no intentions to reintroduce the RX 100 in India at this time.