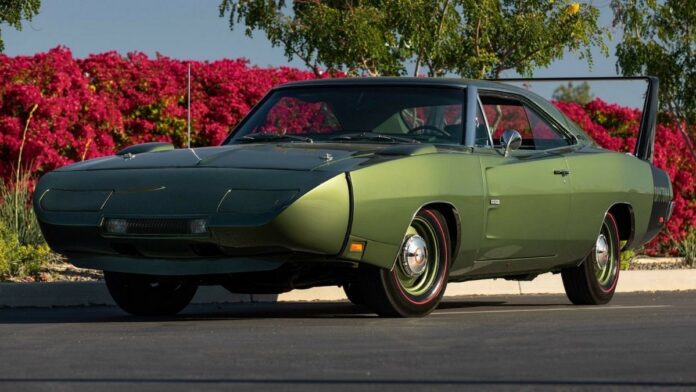 At an upcoming Mecum event, a 1969 Dodge Charger Daytona will be auctioned off as the most extensively optioned example of the car known to exist.

This Daytona is one of just 70 with a 426 cubic inch Hemi engine and one of only 22 with an A833 four-speed manual transmission made in 1969. The twin Carter AFB 4-barrel carburetors provide 425 horsepower, and the N51 Max Cooling Package adds a 26-inch radiator, 7-inch fan, fan shroud, and power steering cooler to keep it cool.

The “Super Trak Pak” option added a Dana 60 rear axle with a 4.10 gear ratio and a Sure-Grip limited-slip differential to 440/426 automobiles with four speeds.

The nicest aspect of this muscle vehicle has to be the colour, which is a F8 Dark Green Metallic tint with matching steel wheels and a black rear wing. The inside is the same C6G Green as the outside, with vinyl bucket seats.

This stunning machine was delivered new to Dodge City, Inc. in Phoenix, Arizona, after being built at Chrysler’s Hamtramck facility. A few years ago, the automobile was professionally restored, with a focus on keeping the original sheet metal.

Dodge created the Daytona as a homologation special for NASCAR racing. The car’s rear wing and front nose cone were so successful that it was almost immediately outlawed, but not before it had a string of victories over the opposition.

On May 13-21, Mecum’s Indy sale will auction off this 1969 Dodge Charger Daytona. It includes the Chrysler Registry Report as well as a copy of the original broadcast sheet.