Next-Gen Hyundai Verna Spied in India for the First Time 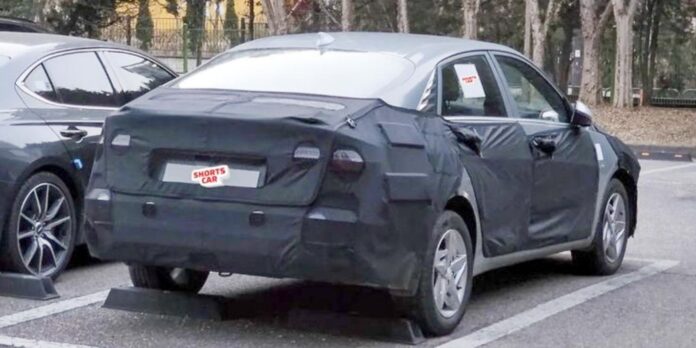 With the Hyundai Verna being one of the best-selling midsize sedans, the next generation has been widely anticipated, and the first clues have emerged. The all-new Hyundai Verna has been sighted for the first time in India testing under camouflage, indicating that it could be introduced in India next year.

The country’s second-largest automaker might adopt the brand’s worldwide and Indian design philosophy of Sensuous Sportiness. It has a prominent front grille, redesigned split headlamp cluster, new LED tail lamps, a set of newly designed wheels, fastback-type roof like the Slavia, updated front and rear bumpers with new housings, and so on.

The forthcoming Hyundai Verna is projected to be built on a new base, allowing for bigger proportions. According to spy photos, the cabin could get a redesigned dashboard and centre console, a larger 10.25-inch touchscreen infotainment system, automated climate control, an all-digital instrument cluster, a sunroof, and six airbags, among other things.

India may stay with the popular 1.5-litre four-cylinder petrol and 1.5-litre four-pot diesel engines with manual and automatic transmission options. Hyundai may use a mild hybrid system to boost efficiency. It will go up against the Honda City, Maruti Suzuki Ciaz, Skoda Slavia, and the VW Virtus, which will be released soon.

Hyundai Motor Group will more likely launch the facelifted Creta and Venue this calendar year and it could be followed by the Ioniq 5, updated Kona Electric and the new generation Tucson at a later stage. As for Kia, the EV6 electric crossover, facelifted Seltos and Sonet, Niro EV, etc are in the pipeline.