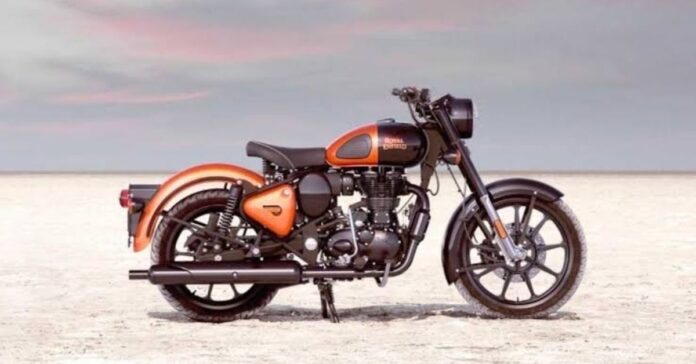 At 6,100 rpm, the 349 cc single-cylinder engine produces 20.2 horsepower and 27 Nm at 4,000 rpm. The new 350 cc SOHC engine has a 9.5:1 compression ratio, up from 8.5:1 on the UCE 350 engine. Along with the SOHC system, the cam gears have been replaced with a timing chain, resulting in less noise and more efficient valve timings. The primary balancer shaft has been replaced with a gear primary drive, which decreases transmission losses while also reducing engine vibrations. The retro-styled Classic 350 sports an all-new chassis and is powered by Royal Enfield’s current J-series engine, which is also shared with the RE Meteor 350. Last year, the new-generation Classic 350 was introduced in India, and it features a new, more contemporary engine, a new chassis, revised suspension, and new wheels and brakes.

The Royal Enfield Model G2, the first full-production motorbike with swinging arm rear suspension, established the Classic’s history in 1948. The Model G2 had a major design influence on the highly successful Classic 500 and Classic 350, which were released in 2008. Since then, the Classic 350 has gone on to become the most popular Royal Enfield model, accounting for over 80% of the brand’s sales over the last decade. The Classic has also been credited for redefining the middleweight motorbike segment and reviving the Royal Enfield brand.