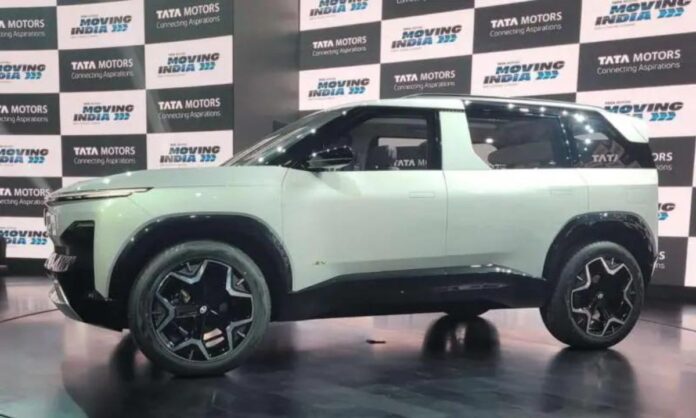 The all-new Tata Sierra SUV makes its public debut in its near-production form at the Auto Expo 2023. Its ultimate form will reach the road in 2025. The Sierra will slot above the Safari SUV in Tata’s product lineup, competing against the Mahindra Scorpio-N. To appeal to a broader audience, the business will provide it with two engine options: gasoline and electric. Tata has yet to divulge its specs.

The Sierra electric is projected to feature a larger battery pack than the Tata Nexon EV Max. The latter has a 40.5kWh battery pack and a stated range of 437km on a single charge, according to ARAI. It is also powered by an electric motor. The arrangement produces a maximum power of 143bhp and torque of 250Nm. The new Tata Sierra petrol variant might be powered by one of the company’s new turbocharged gasoline engines, which were unveiled at the Auto Expo 2023.

To clarify, the domestic carmaker revealed 1.2L, 3-cylinder and 1.5L, 4-cylinder petrol engines with stated output of 125PS with 225Nm and 170PS with 280Nm, respectively. The former might also power the Nexon small SUV, while the latter could power the Harrier and Safari petrol models.

The Tata Sierra petrol will be slightly different in terms of style and aesthetics from its electric counterpart. The production-ready model is expected to be similar to the recently shown model. The Sierra EV is distinguished by a new fake grille, a stylish front bumper, sharp headlights joined by a chrome strip, dual-tone alloys, blacked-out C and D pillars, and a huge glasshouse. It has an upright posture and a flatter bonnet.

Tata Motors also intends to enter the highly competitive mid-size SUV sector to compete with the Hyundai Creta, Maruti Grand Vitara, and Kia Seltos. The car will be based on the Curvv concept, which debuted in India at the 16th Delhi Auto Expo.