HomeExclusiveThis 1995 BMW M3 GT Is One Of Just 50 In The...
ExclusiveFun Reads 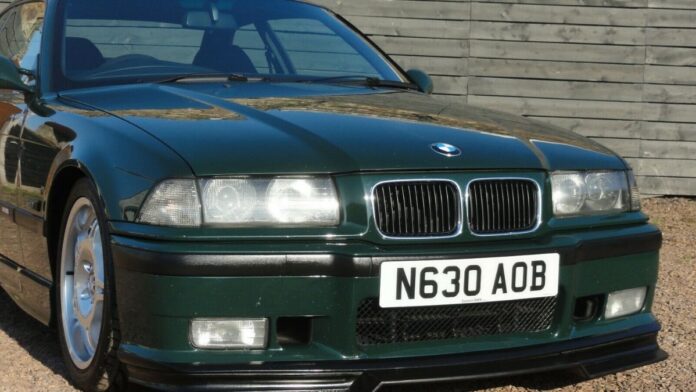 You may not be familiar with the BMW M3 GT, but it is one of the best variants of the E36-generation M3 ever built.

Only 356 M3 GTs were built, and as the name suggests, it delivered somewhat more performance than the already powerful E36 M3. Most significantly, BMW improved the 3.0-liter naturally aspirated six-cylinder by fitting it with the same small intake funnels as the 3.2-liter it released in late 1995. The 3.0-liter sports a revised 264-degree camshaft and produces 295 horsepower, up from 286 horsepower in the normal E36 M3.

Read more: Austin Healey Returns In Restomod Form By Caton With A $600k…

According to the description, the car has 129,000 miles (207,605 km) on it and has had six owners since new, with the current seller owning it since 2011. It is being offered with all of its accompanying documentation and invoices, as well as a tracking device.

BMW’s engineers equipped the M3 GT with a pair of unusual 177.5 front and 178.5 rear forged wheels encased in 235/40 tyres, in addition to tuning the engine. The car also had a prominent rear spoiler and, unlike the normal E36 M3, was only ever made as a two-door coupe rather than a sedan.

The inside of the automobile also has a number of distinctive features. Amaretta sports seats with Mexico Green Nappa leather highlights and BMW M coloured stripes, as well as an Alcantara steering wheel, are among them.

Trending Now:  Speed Limits in the United States by Jurisdiction

The vendor claims that the car has been garaged since new, and while the asking price may sound high, considering its rarity and the current insane used car market, we wouldn’t be surprised if someone paid £90,000 for it.