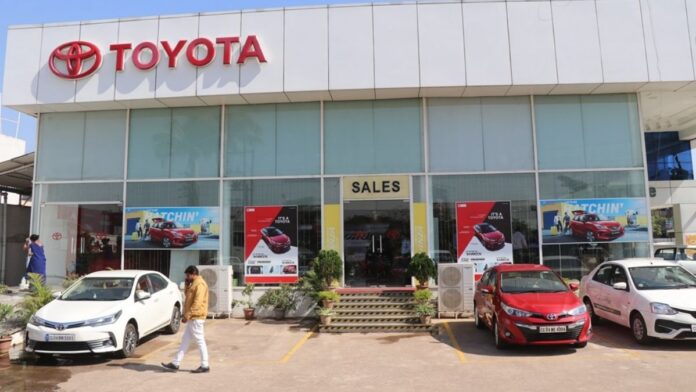 Toyota Kirloskar Motor today released the monthly sales tally for July 2022, which totaled 19,693 vehicles. When compared to the same period last year, when 13,105 units were sold, this represents a 50% increase in volume. The figure for July 2022 is the company’s highest monthly sales total since its inception.

Toyota Sales July 2022 got a 19% rise in volume over the previous month’s total sales of 16,500 units in June 2022 on a month-over-month basis. In terms of sales success, TKM’s Associate Vice President of Sales and Strategic Marketing, Atul Sood, stated, “The month of July has been great for the company.” Both in terms of sales and our efforts toward “mass electrification” in India, as we presented the Urban Cruiser Hyryder, the first self-charging strong hybrid electric vehicle in the high volume B SUV sector.”

He also stated that the first reaction to the recently introduced Toyota Urban Cruiser Hyryder has been “outstanding,” owing mostly to the powerful hybrid model. In India, Toyota currently sells the Innova Crysta, Fortuner, Glanza, Urban Cruiser, Camry Hybrid, and Vellfire. While the Innova Crysta and Fortuner are the market leaders in their respective segments, Glanza and UC have also gotten positive feedback.

The Glanza (based on the Maruti Suzuki Baleno) was substantially modified a few months ago, and the all-new Urban Cruiser is on the way. Toyota will introduce the Hyryder midsize SUV on August 16, and formal reservations are already open at authorized dealerships. It shares many similarities with the Maruti Suzuki Grand Vitara.

The Hyundai Creta, Kia Seltos, MG Astor, VW Taigun, Skoda Kushaq, Nissan Kicks, and other vehicles will compete with the Urban Cruiser Hyryder. It will be the segment’s first hybrid SUV with 4WD capability and a class-leading claimed fuel efficiency of close to 28 kmpl. It has a 1.5-liter mild hybrid powerplant and a 1.5-liter strong hybrid powertrain. The 4.3-metre-long five-seater is also loaded with features such as a nine-inch touchscreen, six airbags, a heads-up display, and so on.