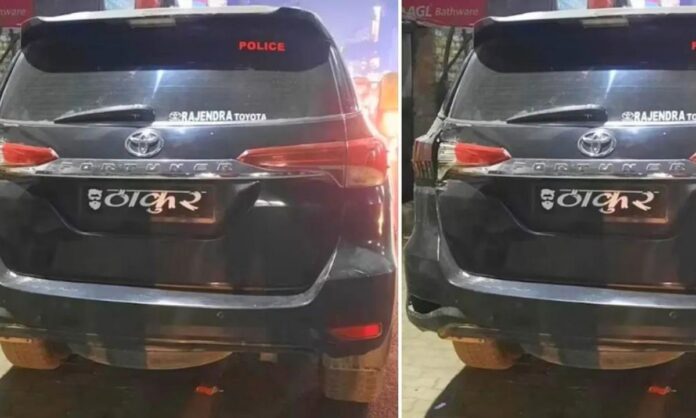 The event occurred in Varanasi, Uttar Pradesh. According to the information, the owner of a Toyota Fortuner in Varanasi city had posted his surname instead of the vehicle’s registration number on the licence plate. Someone complained about the car on social media, and the police were notified.

The Uttar Pradesh police responded by stopping the car at one of the checkpoints. The car came to a halt at the Varanasi Cantt Thana checkpoint. The vehicle’s owner had changed the registration number to “Thakur” on a new plate.

The police at the checkpoint promptly impounded the car and issued a challan for Rs 28,500 to the Fortuner’s owner. The police have not revealed the identify of the owner, nor have they released the challan data. The sum was only released to the press.

Surnames And Positions May Not Be Displayed.

On December 24, 2020, the authorities issued a fresh directive. Since then, officers across the state have issued countless challans. The first incident occurred in Kanpur, Uttar Pradesh, when an individual got a Rs 500 challan. He was arrested under Section 177 of the Motor Vehicle Act. Repeating the offence would result in a Rs 1,500 punishment, according to the officers. However, the RMO’s car also had stickers on the registration plate.

The latest directive comes after Maharashtra’s Harshpal Prabhu wrote to the Prime Minister Officer. In his letter to the PMO, he discussed the public display of caste and how it leads to caste-based crimes on the highways. Despite the fact that there was no formal notification from the PMO to the UP Police, the letter became viral on the Internet, and the UP transportation department decided to take action.

The UP Police have taken action against similar cars before. Last year, the Gautam Budh Police Station organised special teams and conducted a two-day operation to target similar cars. Hundreds of challans were issued, and officers immediately removed the stickers from the vehicles. The MV Act already has a provision for taking action against a show of caste or position of power. However, most state police departments disregard them.

This is why the Indian government has implemented the High-Security Registration Plate, abbreviated as HSRP. Currently, the authorities in Delhi-NCR have required the usage of HSRP, and any vehicle that does not have these high-security plates is issued a challan. These registration plates are tamper-resistant and are secured to the car using a one-time-use bolt that cannot be unlocked again.

In the past, authorities have seized a large number of automobiles for having manipulated registration plates. However, this is the first time that someone has used a prominent personality’s registration number.

400-Mile Electric Chevrolet Silverado Due On Sale by Late 2023