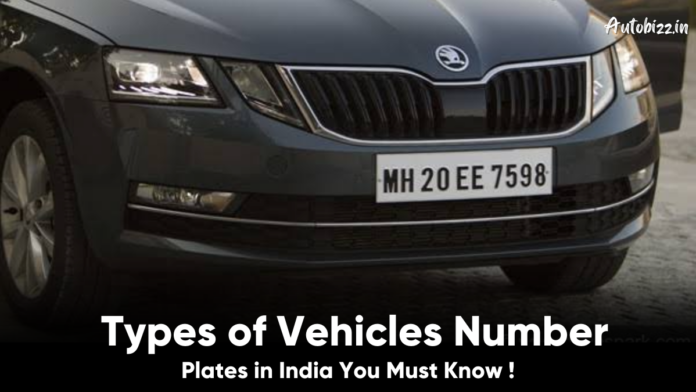 Now that you are here in this post, let’s comprehend the different types of number plates in a country like India.

A number plate is an essential component of any vehicle. If you want to acquire a car, you’ll need a basic grasp of vehicle licence plates. After all, how would anyone recognise the car if it didn’t have a licence plate? Given the importance of automobiles being able to travel on roads, it has a critical role to perform.

The RTO, or Regional Transport Authority, specialises and issues number plates. Car owners are required to affix a number on their vehicle, and the only way to do so is to use a vehicle licence plate. But did you know there’s a phrase for number plates? Yes, it’s also known as the HSRP (high-security registration plates). The latest improvements to these plates, unlike prior bolts on these plates, stay held in place on the vehicle using snap locks and tools. If one desires to remove them, that plate will be rendered unusable for future use.

Today’s number plates come in a variety of colours, some of which you may not be familiar with at first. So, to help you understand which colours represent which, let’s look at the many sorts of plates available on the market.

Because different number plates have varied meanings, it all relies on the type of vehicle. So, which form of identifying plate will you need to install in your car? More information can be gleaned from the following narration:

You May Like:  Top 10 Best Selling Second Hand Cars In India

The Indian government has given a variety of number plates for various vehicle kinds. The following is a list of these items. To learn the significance of each, follow the arrows:

The most typical sight on the road is a vehicle with a yellow background of a number plate. The number plate in question has a yellow backdrop with black characters. This design indicates that the vehicle has been utilised for business reasons, such as transporting passengers or goods. This design is required for a commercial vehicle on the Indian subcontinent.

Although blue backdrops are uncommon in India, a car with this background and white lettering can be found. It denotes that the automobile belongs to one of the foreign consulates. The numbers denote the country in which the consulate is located.

People who want to get their driver’s licence must take a test driving course. That’s where the first test vehicles appear. The cars have a red background with white lettering. Governors of states, on the other hand, drive cars with a crimson background. The President of India drives an automobile with a crimson backdrop and gold letters spelling out the Indian national insignia (Emblem of India).

Number plate with upward-pointing arrow: This unusual number plate may be hard to find on the road. However, if you did, keep in mind that the vehicle was a military vehicle. Only military officers are permitted to drive vehicles with an upward-pointing arrow on their licence plates. The registration numbers on this plate belong to the Ministry of Defense. The Broad Arrow is the third and first upward-pointing arrow. These arrows are used in several countries of the British Commonwealth. Following the arrow, there are two digitals that indicate the year the military vehicle was purchased. A base code and a serial number are included. The vehicle’s class is indicated by the penultimate letter of the licence number.

Commuting by your own vehicle in a nation like India is not a cakewalk. But understanding these aforementioned types of number plates will make things simpler from your end. Thus, this post compiles elaborating the details about vehicle licence plates and how to spot them clearly.