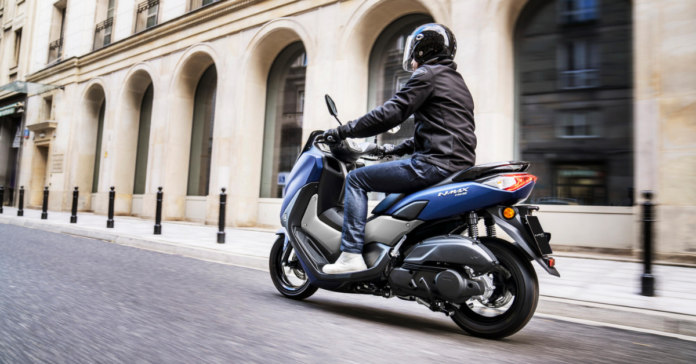 The freshly upgraded 2022 edition of the Yamaha NMAX 155 scooter has just been released in European countries. Because both are powered by the same engine as the company’s YZF-R15 V4 motorcycle, the scooter is identical to the Yamaha Aerox 155, which was just debuted in the Indian market. For 2022, the brand has made some minor changes inside and exterior to make the scooter more fashionable and appealing to younger clients.

The scooter’s aesthetic has been improved with features such as a new LED headlamp, a lower-placed handlebar, keyless start, and minor external body updates. The manufacturer repositioned the handlebar to make turning the scooter easier. As a result of the frame modification, more legroom has been incorporated. Because of the somewhat taller handlebar, riders of all sizes may find it easier to ride.

The new CCU (Communication Control Unit), which can be linked to your smartphone, is another addition. Once you’ve linked your phone to the My Ride app, you’ll be able to see all of the crucial information, like service and maintenance schedules, as well as navigation, that the Yamaha Y-Connect and Yamaha ConnectX apps don’t have. It also has a 12V charging outlet for added convenience.

This engine comes equipped with Yamaha’s variable valve actuation (VVA) system. As far as its India launch is concerned, the company has not made any announcement yet and also the Aerox 155 has recently been introduced to the Indian market, hence, it can face some delay but it is surely expected to come to our country.

Yamaha’s variable valve actuation (VVA) system is standard on this engine. In terms of its introduction in India, the firm has yet to make an announcement, and the Aerox 155 was only recently brought to the Indian market, so there may be some delays, but it is expected to arrive in our country.