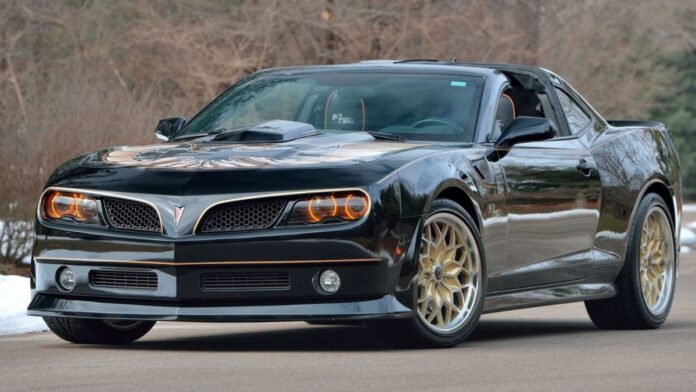 Have you ever pondered what would happen if a 2014 Chevrolet Camaro SS was coupled with a vintage Pontiac Trans Am? Well, wonder no more, for Mecum is about to auction off this one-of-a-kind masterpiece.

Back in the day, a business called Trans Am Depot altered this Camaro, and it’s now known as the Camaro SS Trans Am Hurst Edition. It’s number 9 out of just 15 made, and it’s one of the most interesting Camaros you’ll ever see.

Read more: Someone Has Managed To Ruin A Gorgeous Lexus LC 500

The car’s bodywork has been extensively modified to make it seem more like a Trans Am than a Camaro. The stock Chevy front fascia, for example, has been totally rebuilt with a new bumper, split front grille, fog lights, and Trans Am-inspired headlights with orange ‘Angel Eye’ daytime running lights.

The Pontiac theme continues with a unique hood that features the Trans Am’s iconic screaming chicken motif, while a massive power bulge indicates that this muscle car is serious about business.

Along the sidewalls of the automobile, dazzling silver and gold wheels wrapped in Goodyear Eagle F1 tyres continue the transformation. A distinctive bumper, a lip spoiler, and unusual taillights, all of which are identical to those seen on an original Trans Am, all attract the eye. The car’s detachable carbon fibre T-top adds to its uniqueness, according to the description.

The Camaro is powered by a 6.2-liter V8 engine with a supercharger that produces 650 horsepower. A six-speed manual transmission drives the rear wheels alongside this behemoth of an engine.

Interior improvements include the addition of orange and black leather to the seats, dashboard, and door panels, among other things. Carbon fibre accents may also be seen throughout.