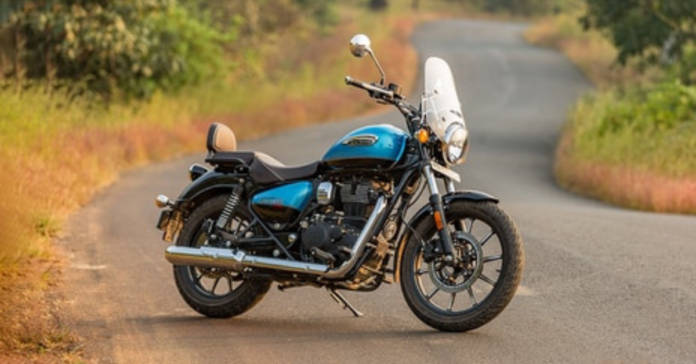 Royal Enfield has unveiled new colour schemes for the Meteor 350 cruiser motorbike, which will be released in 2022. Two new colours are available for the entry-level Fireball trim: Blue and Matte Green, while a new Red colour choice is available for the top-end Supernova trim. The additional colour options will be sold alongside the Meteor 350’s current colour selections.

Royal Enfield has upped the cost of the Meteor 350 cruiser motorbike, in addition to adding new colour options. The new RE Meteor 350’s three models have all increased in price by Rs 4,224. The motorcycle comes in a variety of colours, including red, blue, yellow, brown, and black. Royal Enfield has raised the pricing of the Himalayan Scram 411 and the Himalayan adventure motorcycle, in addition to the Meteor 350.

The new RE Meteor 350 is built on the same J platform as the new-generation Classic 350. It is powered by a 349cc single-cylinder air-oil cooled engine with fuel injection system. This engine produces 20.2 horsepower and 27 pound-feet of torque. The transmission responsibilities are handled by a 5-speed gearbox on the bike.
The Meteor 350 is equipped with telescopic forks in the front and two sided shock absorbers in the back. It has 19-inch front and 17-inch rear alloy wheels with CEAT tubeless tyres in the sizes of 100/90-19 57P and 140/70-17 66P, respectively.

Retro-styled circular headlamps with LED DRL, a peanut-shaped fuel tank, a swooping rear fender, a wide windscreen, LED taillamp, and a USB charger are all included on the motorcycle. It also includes RE’s tripper navigation system, which provides turn-by-turn directions. A windscreen and a passenger backrest are standard on the top-of-the-line Supernova. The Royal Enfield Meteor 350 has a wheelbase of 1,400mm and a ground clearance of 170mm. The Meteor is 6kg lighter than its replacement Thunderbird, with a kerb weight of 191kg.