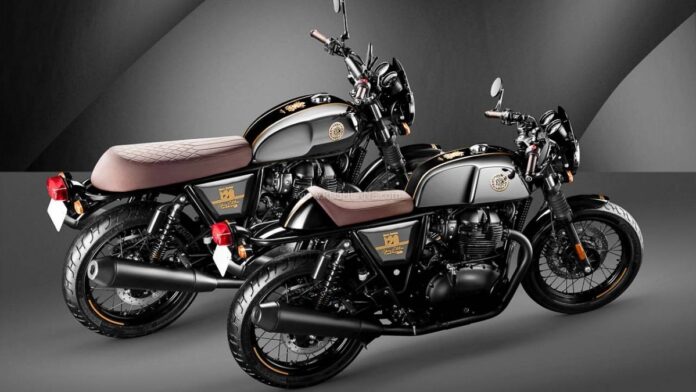 Royal Enfield’s most popular models are the Interceptor and Continental GT 650. In actuality, these two machines propelled the Indian firm from relative obscurity to international prominence. With a sturdy chassis and vintage throwback design, the 650 Twins provided outstanding value for money, much to the delight of the budget-conscious classic biker culture.

To commemorate the company’s 120th anniversary, Royal Enfield announced a special edition 650 Twins at EICMA 2021. Both the Interceptor and the Continental GT 650 featured elegant paint schemes with gold accents, blacked-out mechanical components, and unique design features. Only 480 of these bikes will be produced, and they will be distributed across Europe, America, and Southeast Asia.

The Royal Enfield 650 Twins 120th Anniversary Edition is distinguished by a number of visual improvements. They have a black and gold color scheme with gold accents all throughout. There’s a brass tank badge, hand-painted gold pinstripes, and a 120th Anniversary emblem on the gasoline tank, which is coated in Royal Enfield’s distinctive ‘Black Chrome.’ A fly screen, an engine guard, heel protectors, and bar-end side mirrors, which are typically aftermarket add-ons on the conventional versions, have also been installed by Royal Enfield.

Also Read: Top 10 Most Expensive Motorcycles In The World

In the APAC region, 120 units—60 for the Continental GT 650 and 60 for the Interceptor 650—have been assigned to Australia, Japan, Thailand, South Korea, and the Philippines. Needless to say, these motorcycles will be incredibly rare, and witnessing one in the wild will be a once-in-a-lifetime opportunity. Furthermore, less than 24 hours after bookings opened, the allocation for Australia and New Zealand was totally sold out. It wouldn’t be shocking if all other countries in the APAC region’s allotment were also taken care of.

Aside from the visual alterations, the bikes’ mechanical components remain unchanged. As a result, they continue to be powered by a 648cc parallel-twin engine that is air-cooled and fuel-injected. Both bikes feature a 47-horsepower and 38-foot-pounds-of-torque output. Traditional telescopic front forks and preload-adjustable shocks in the back support the bike, while disc brakes with dual-channel ABS bring it to a safe stop.