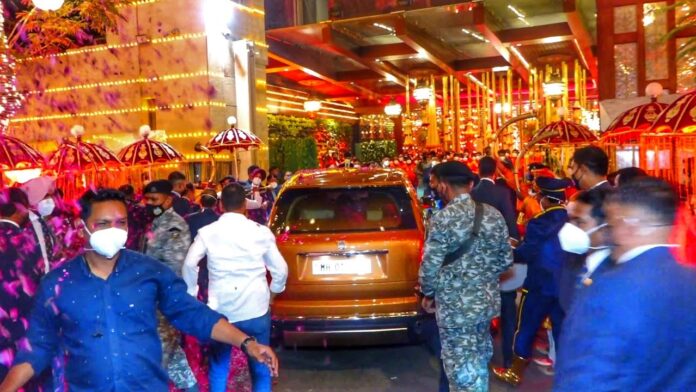 After Anant Ambani’s wedding in a Rajasthani temple, the Ambani family flew back to Mumbai. After the family had returned, we witnessed an unusual scene at the Mumbai airport. Mukesh Ambani is a Z+ protectee, as you are aware. This indicates that he has the highest level of security that can be provided to a civilian. This is the first time Mukesh Ambani has been spotted in a non-bulletproof vehicle, despite the fact that the Ambani family owns four armoured vehicles and frequently uses them for transportation.

The older son of Mukesh Ambani, Akash Ambani, is seen in the video footage operating the brand-new Rolls Royce Cullinan. Anant Ambani is sitting next to him on the co-driver seat, and Mukesh Ambani is occupying the back seat. Since Mukesh Ambani is a Z+ protectee, he is constantly transported in an armoured vehicle driven by a skilled driver who is familiar with all the escape techniques. We’re unsure of his motivation for driving the Rolls Royce Cullinan. It’s possible that his armoured car convoy wouldn’t make it to the airport in time.

For security reasons, the Ambani family does not always ride in the same vehicles. The family will ride in different cars even though they are going to the same place. In the event that a car is involved in an accident or is attacked, this will safeguard the family members.

The video also reveals an army of CISF troops protecting Mukesh Ambani struggling to make room for the cars. They were driven to the Antilia, the Ambanis’ official residence, by Akash Ambani.

Other Cars In Amabani’s Garage

It’s interesting to note that Akash has previously been seen driving around in vehicles like the Bentley Bentayga.

The most expensive Cullinan in India is the Rolls Royce you see in the video. A one crore rupee special paint job is applied to it. There are numerous additional customization options and a unique registration location on the car.

We can see that the new Cullinan is finished in the brilliant Tuscan Sun colour shade, which makes it stand out in the crowd, even though the precise customization options selected by the Ambanis are still a secret. Additionally, it appears that the car has optional 21-inch wheels. The cost of the alloy wheels is only disclosed upon request and is not accessible online.

A “0001” registration number is also assigned to this Cullinan. According to the RTO, they chose the number from a new series because all the numbers from the current series had already been claimed, despite the fact that the VIP number typically costs Rs 4 lakh.

For this reason, the RTO demanded Rs 12 lakh just for the registration number. According to RTO, the new series can begin without finishing the previous one with the Transport Commissioner’s written consent. The RTO, however, charges three times as much as the typical registration fee.